Use the contents of your recycling bin to make a fun toy bottle cap rattlesnake craft! This rattlesnake actually rattles since the caps bang against each other. And it’s almost free to make! Other than your garbage, it uses regular craft closet staples.

I was recently challenged to make something with bottle caps – stay tuned for more bottle cap crafts coming in a couple of weeks. Some friends helped me collect a nice amount (we don’t really drink soda, so the ones we have are all from seltzer. 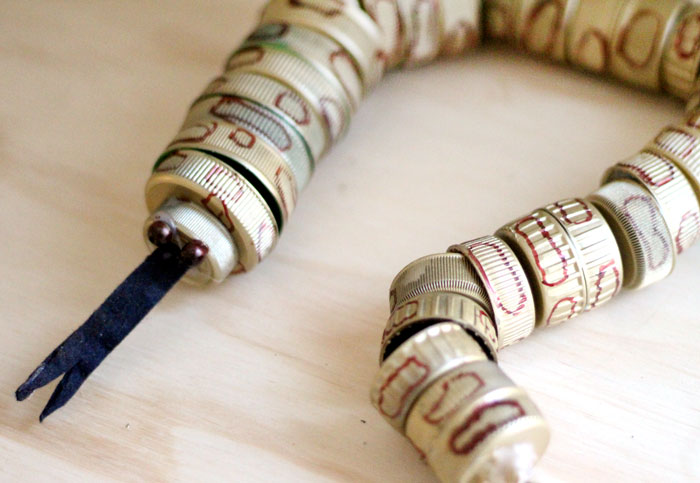 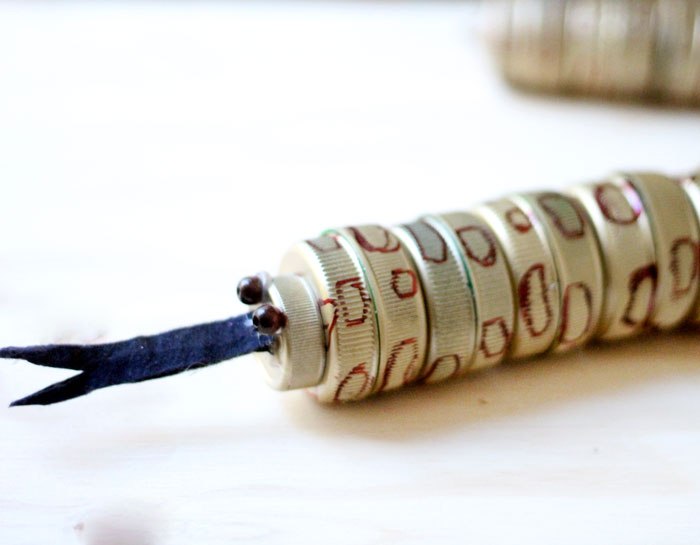 This bottle cap rattlesnake craft makes a fun toy for kids who don’t put things in their mouthes. M loves it and was so excited when I made it for him. It can definitely be made by kids, as long as the appropriate parts are done by an adult  (such as creating a hole and the hot glue parts.) But stringing it is a great fine motor activity for kids. If the twine makes it difficult, you can use chenille stems or wire instead. 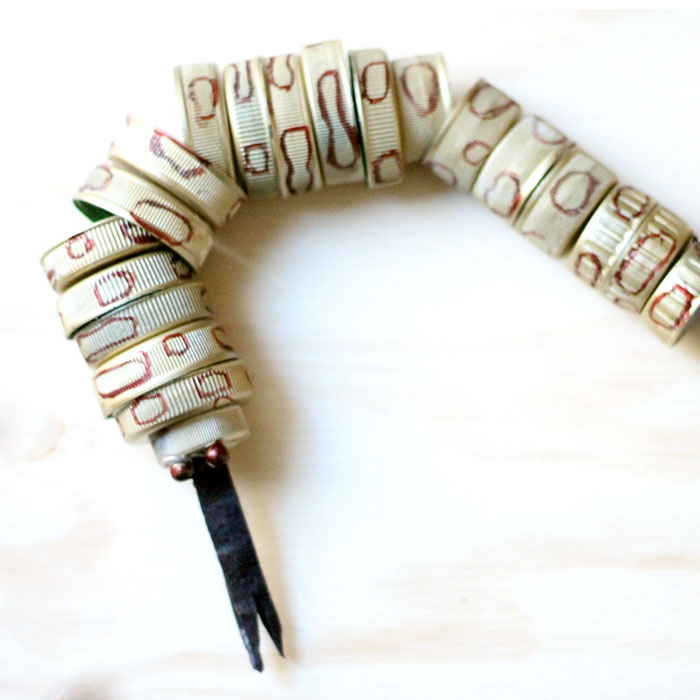 What you need to make a DIY toy rattlesnake craft:

How to make a rattlesnake craft from bottle caps: 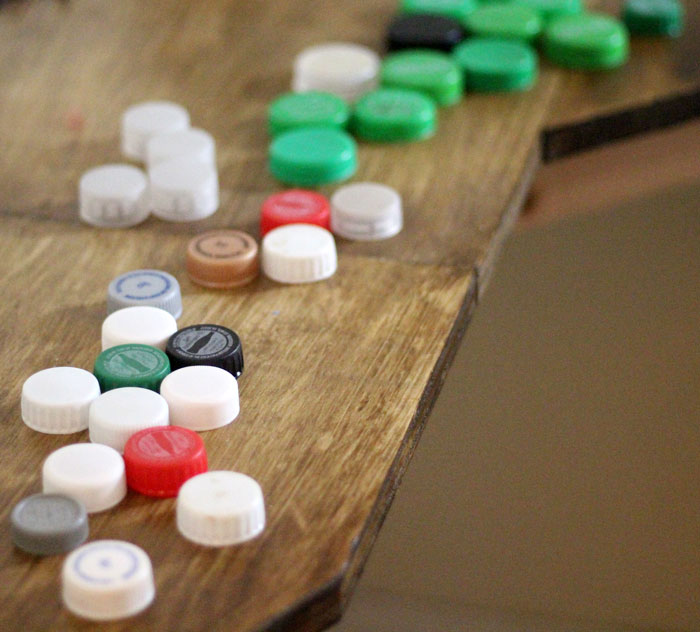 2. To make the holes, I attached this tip to my heat tool and let it heat up. Make sure there are no kids around as this gets REALLY hot. 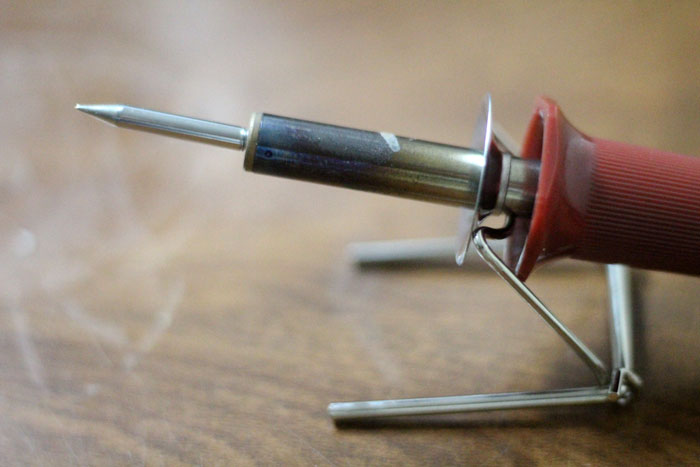 Slowly melt a hole into the center of your bottle caps. Some plastic will collect around the edge of the  tool and will eventually be released on its own. NOTE: USE THIS TOOL CAREFULLY. I DO NOT TAKE RESPONSIBILITY, NOR WILL I BE HELD ACCOUNTABLE FOR ANY INJURIES OR DAMAGE CAUSED BY IT. If you are concerned, you can really just use an awl. I liked the big hole this gave me with no exertion. 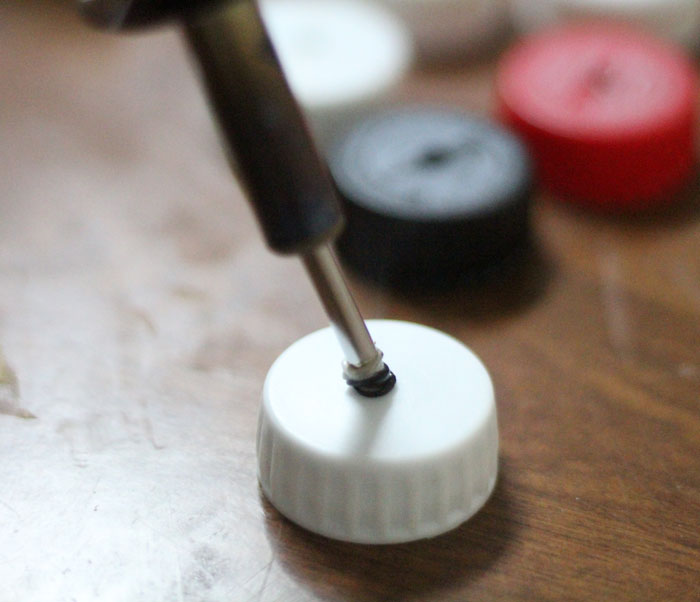 Do this to all of your bottle caps. 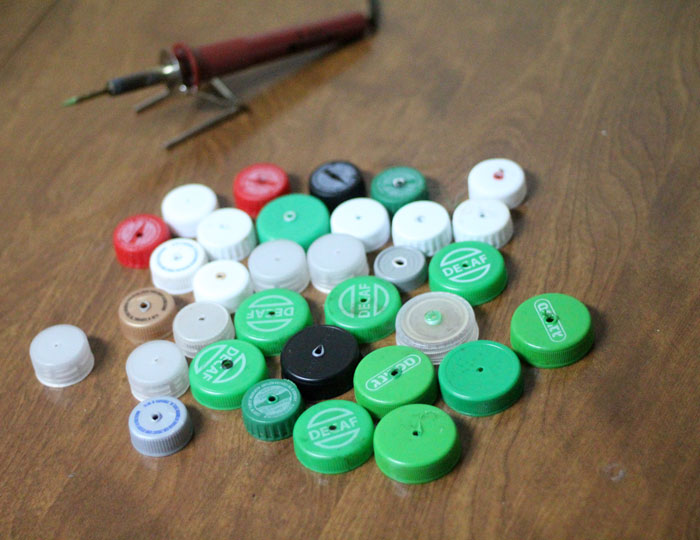 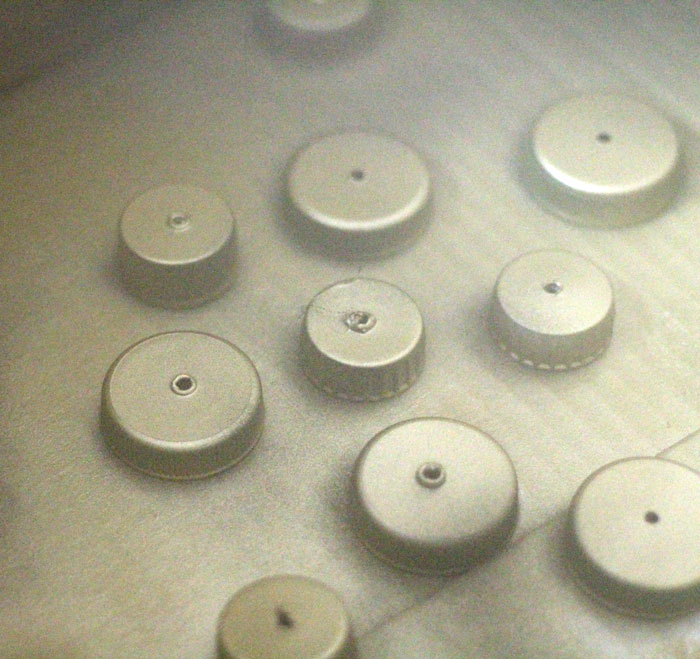 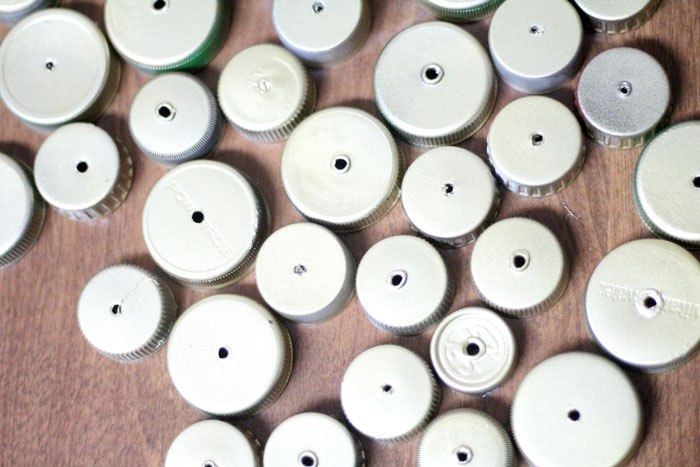 4. Start stringing them on your string in pairs with the open sides facing each other. 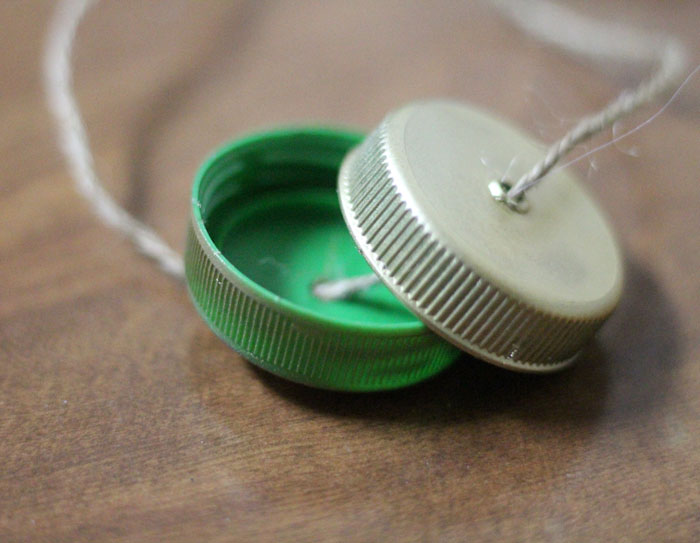 Start with the biggest and finish with the smallest. 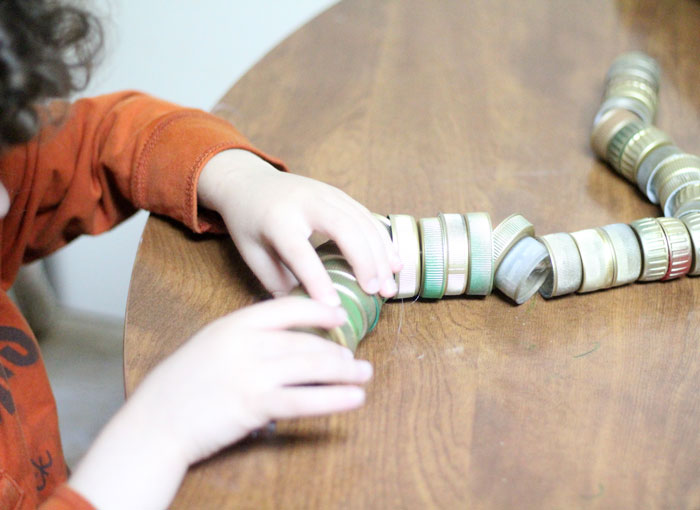 5. Add a small one at the beginning, with the bigger caps, for the face so that the inside of the little cap faces the outside of the big cap (see photo) 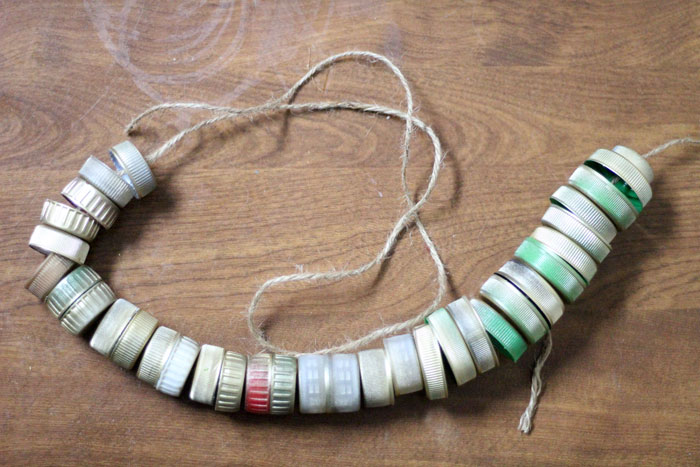 6. Tie a knot in the twine flush against the last (small) cap at the tail end of the snake. Hot glue it in place and trim the twine. 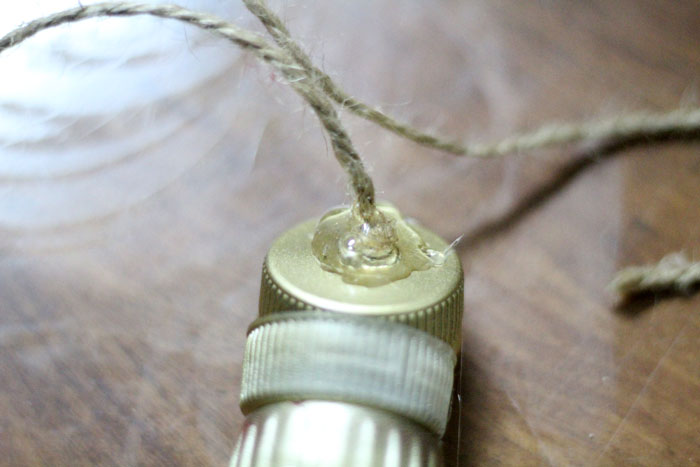 7. Tie a knot in the other end of the twine flush against the head. 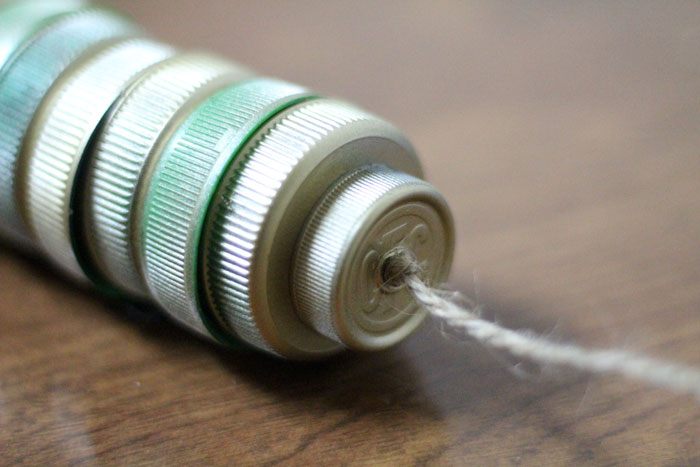 8. Cut out two strips of black felt with a long triangle cut out of the end. They should be the same size. 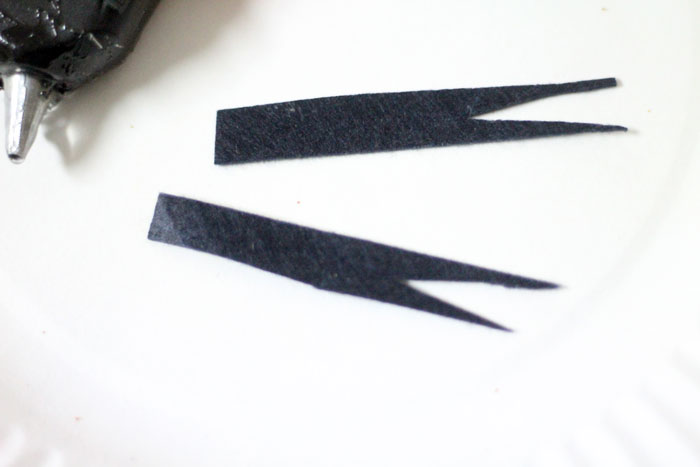 9. Trim your twine to the size of your black felt – minus the triangle. 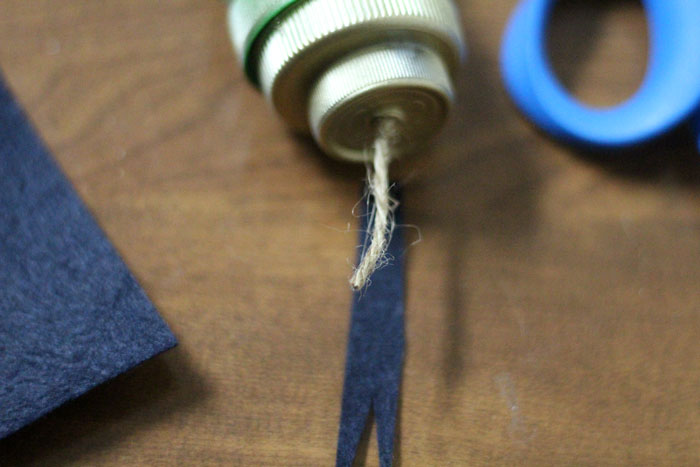 Hot glue one piece of felt under the twine with the end flush against the cap. 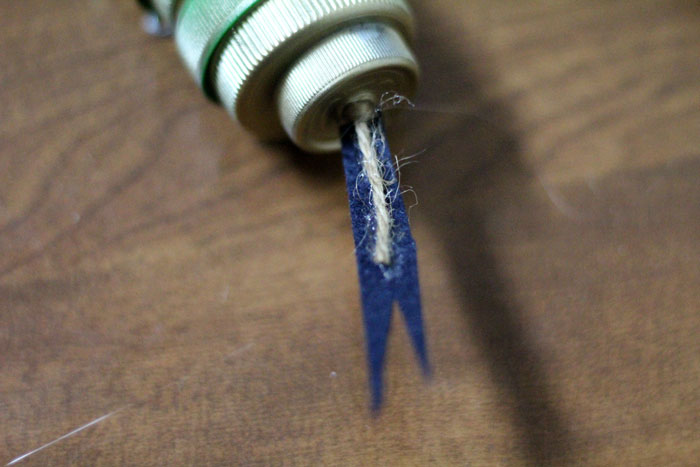 Hot glue the other strip of felt on top so that it sandwiches the twine and glue it against the bottle cap as well to reinforce it. 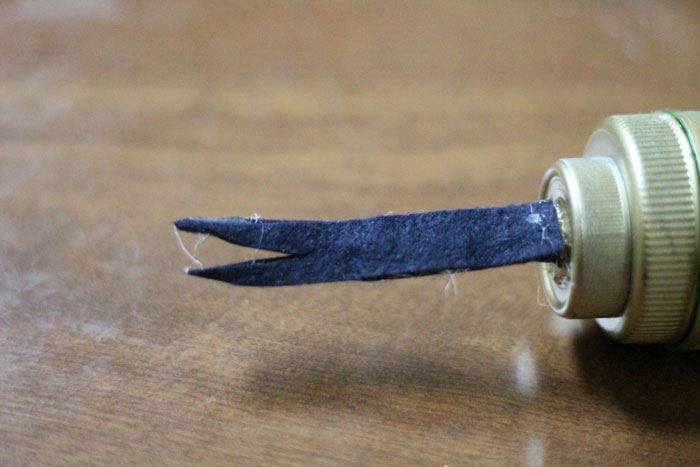 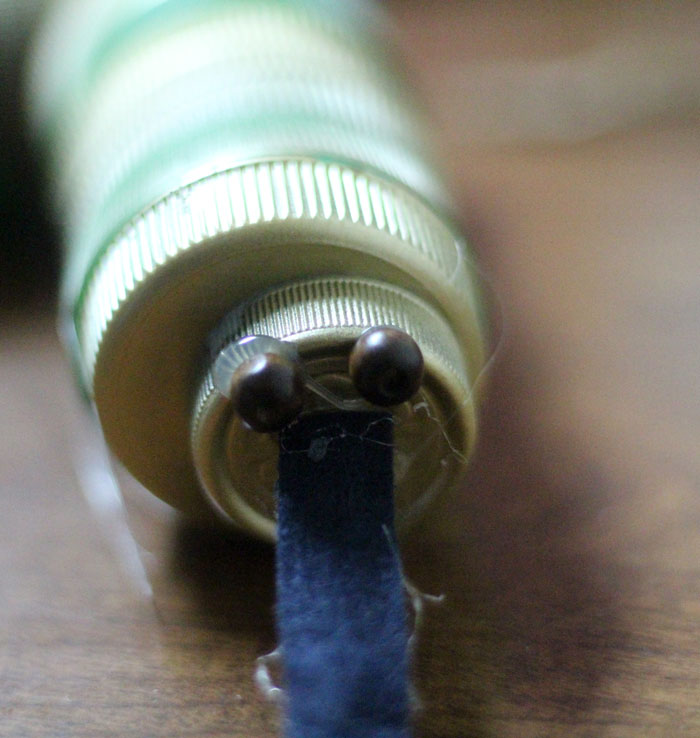 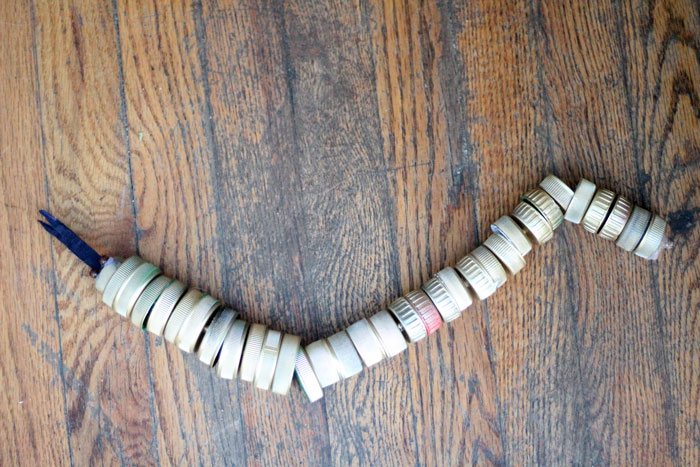 Draw on some rattlesnake spots! 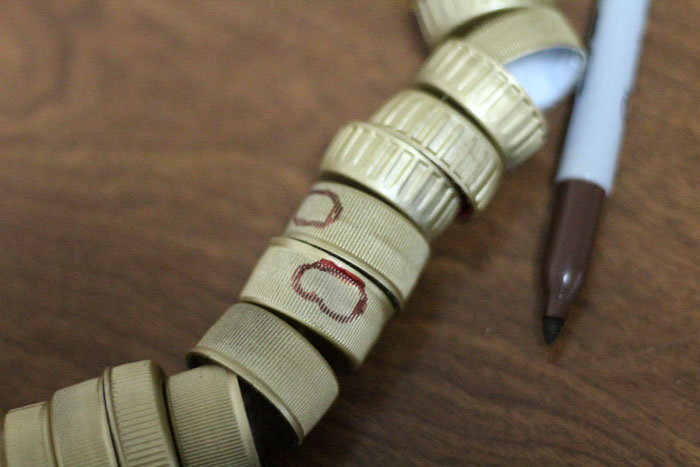 Your bottle cap rattlesnake craft is ready to play with. Isn’t it fun how it rattles?! 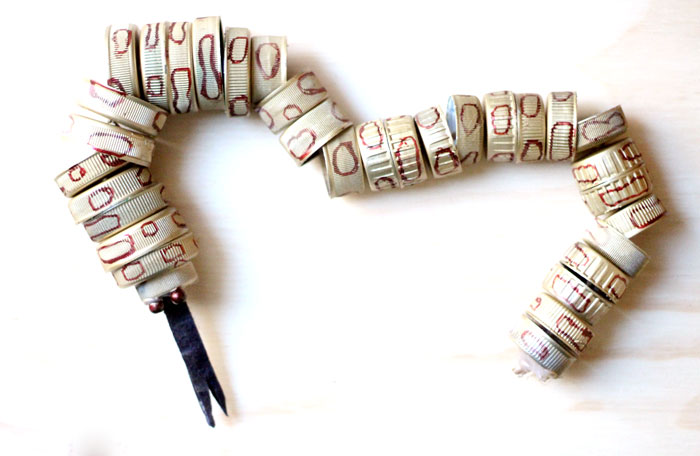 I saw a craft that someone had on herd & they used bottles from water bottles & they made a flag. Well I wanted to make one but now I can't find it. Could you possibly show me how to make one please & thank you. It's going to be part of a fund raiser.

have no idea, but publishing your comment in case someone else sees it and can help you!

Arizona Unit Study - Ben and Me

[…] Rattlesnake Toy that Really Rattles from Moms and Crafters […]

DIY Toys for Kids from Recyclable Materials - Adventure in a Box

9+ Bottlecap Crafts You Can Do This Christmas Season

[…] Rattlesnake Toy that Really Rattles from Moms and Crafters […]