Throw a fun and impressive Elmo themed party with these fun Elmo birthday party ideas on a budget! M absolutely LOVED his Elmo party (even though he was sick for the event) and it was a huge hit.

M is seriously obsessed with Elmo, so, while unoriginal, I decided that it’s the best way to go for his second birthday. And I can’t say that I regret it. He really and truly loved it.

The thing is, I’m not a huge believer in spending so much on a young child’s party. I think it’s about the memories mostly, and so I knew that this was something he’s likely to remember, but wouldn’t cost us much.

So, I went with simple DIY whenever possible, while purchasing basics and making them work for us.

For starters, I made M a very simple no-sew Elmo tee to wear. If you want the full tutorial, you can find it here. 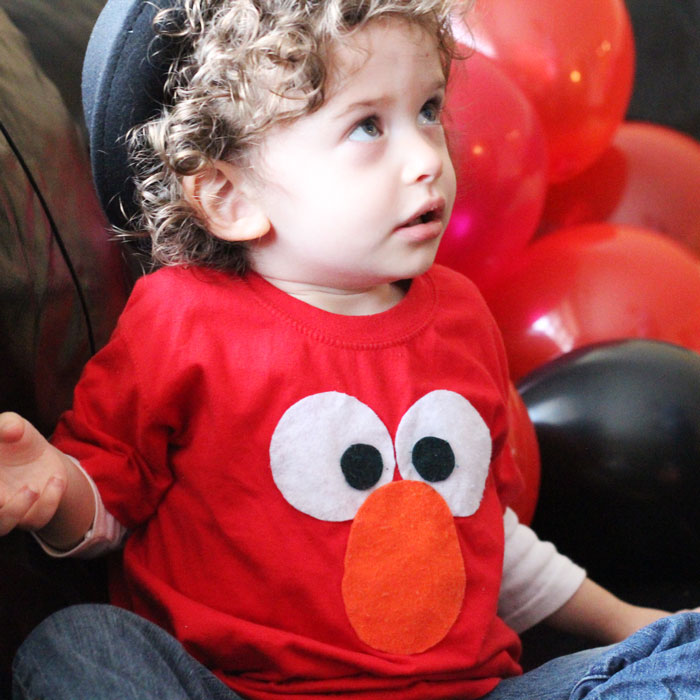 I basically started with a simple red t-shirt and glued on felt pieces. His aunt bought him the bowler hat, which she plunked on his head right when she saw him. It was the perfect getup.

The tee still works. He wears it regularly, and it’s his favorite top! 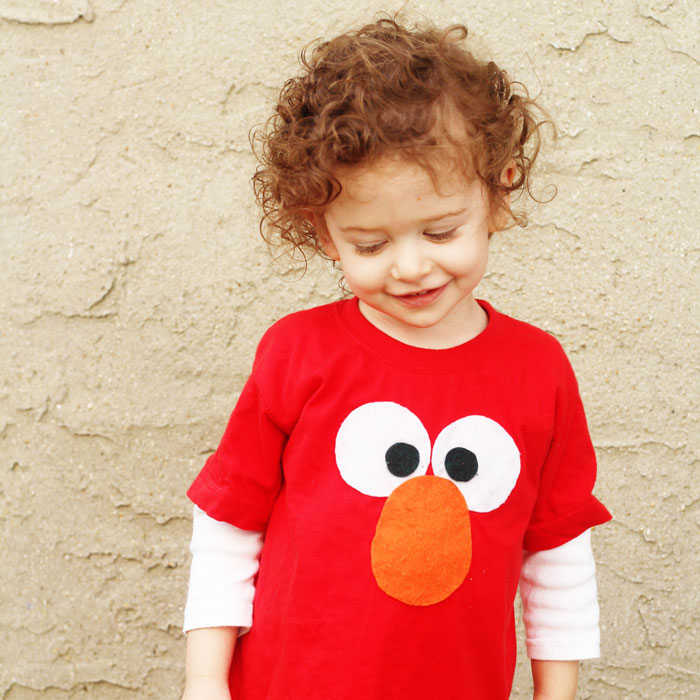 We had a main table in the center of the dining room, and a sideboard, which we used as a sweet table. It was really “buffet-style”, with everyone gathering on chairs, and on the couch. The “sweet table” I’ll get to later, as it really contained all the themed items. The buffet was on the main table. It’s hard to really call it a buffet, as we served more “light refreshments” than an actual meal, but that’s what I’ll call it.

I didn’t want to buy Elmo themed party goods for fear of Elmo overload. I decided to stick to the theme of the shirt: simple shapes forming the main features. I had an idea to arrange paper goods to symbolize Elmo’s features.

I got large white plates (sneaky and frugal!), huge black party cups, and an oval orange platter. I started with a red plastic table cloth (I used another of the same for the sweet table.) 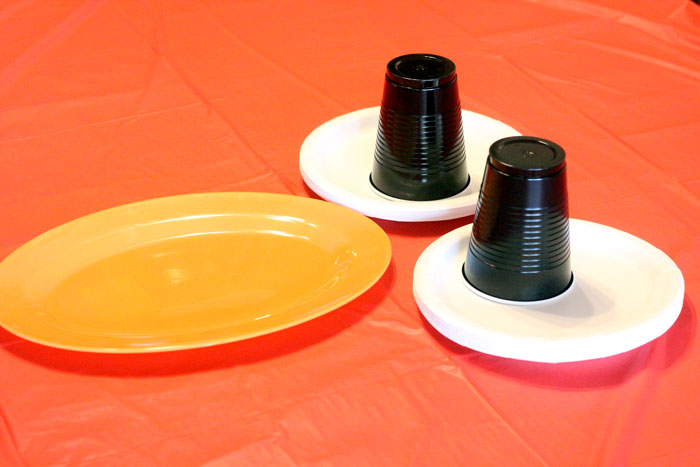 I stacked a cup on top of two piles of plates and filled it with black plastic cutlery. 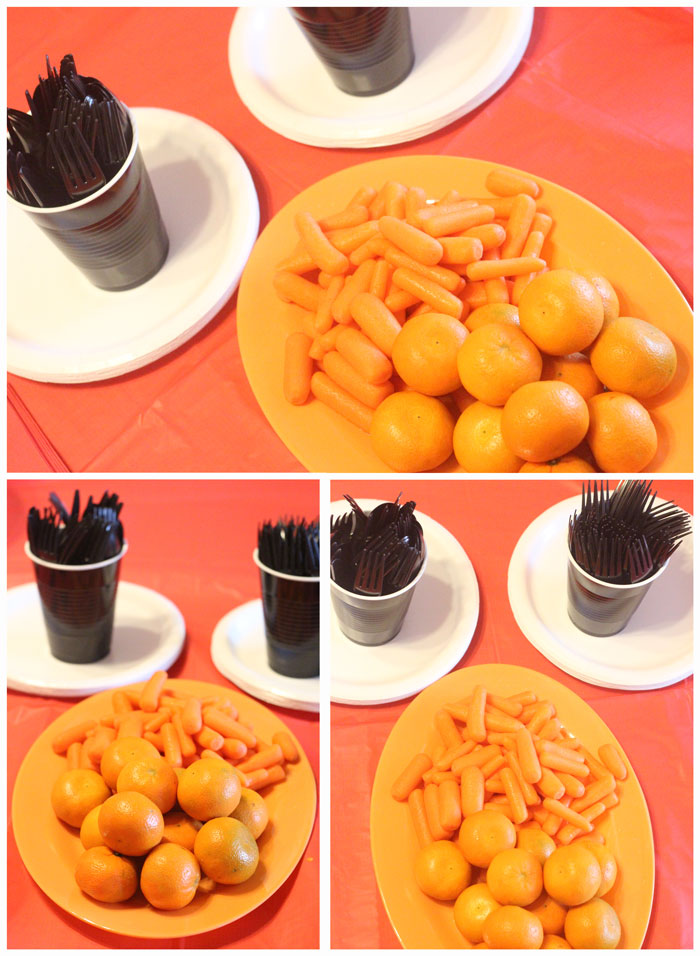 Since it was a two-year-old’s party, I tried to keep a good selection of healthy food, so I filled the orange tray with clementines and baby carrots. The baby carrots were gone by the end of the party, and the clementines were half-gone. 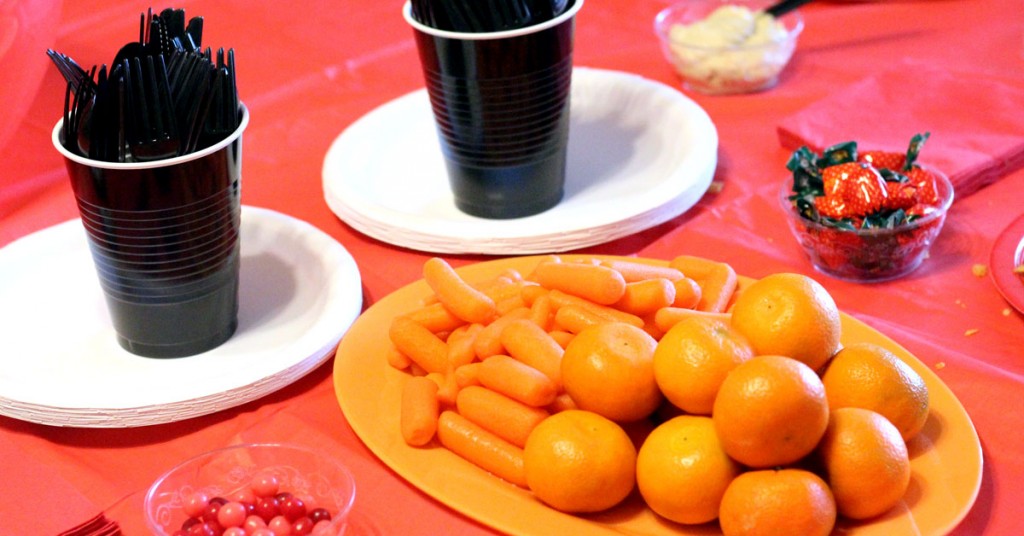 The rest of the foods (a guacamole, hummus, a few types of crackers to dip, chips, some candy and cookies, and baked ziti) were scattered around it on the table, along with red napkins that basically blended in. 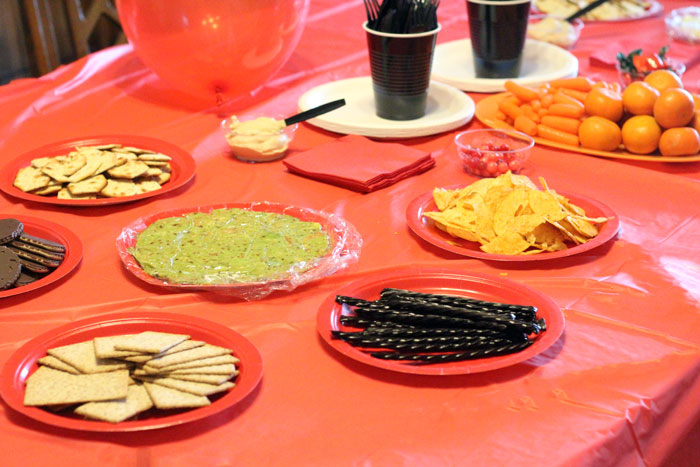 I went really impressive but really simple with the party favors. I made simple Elmo treat boxes (which I’ve uploaded here for you to print for free). They here extremely popular (maybe too much so?!) and easy to transport (our apartment is too small, so we did it at a local relative) and hand out. 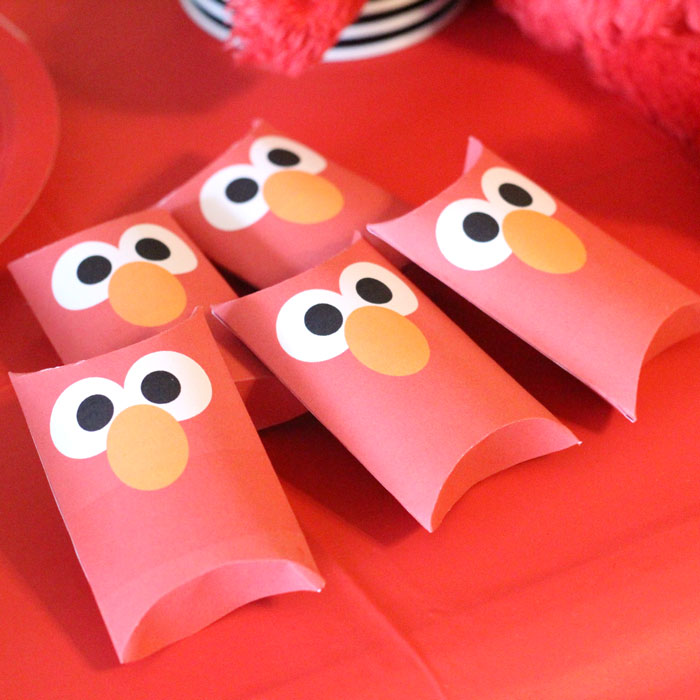 I filled it with chewy Lemonheads and some strawberry candies. If you want to add value, you can put in a little Elmo stamper, or a similar small prize, and put in less candy.

Another very successful thing I did was these gelatin cups. I started with mini red party cups, painted it with craft acrylics, and served it with mini spoons. You can read the full tutorial here. 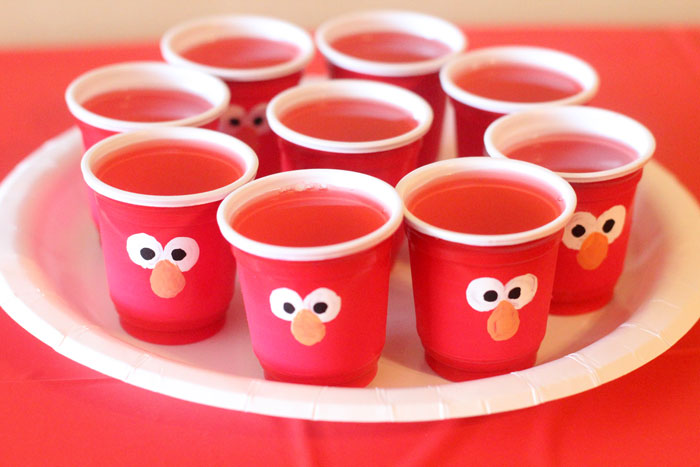 I made the cake (red velvet) in a small cakelette pan (yup, it’s a mold!) I’ve been wanting to try.  It is REALLY simple – you don’t need to know what you’re doing. The cake is from a mix, the frosting from a container, and the full tutorial can be found here. 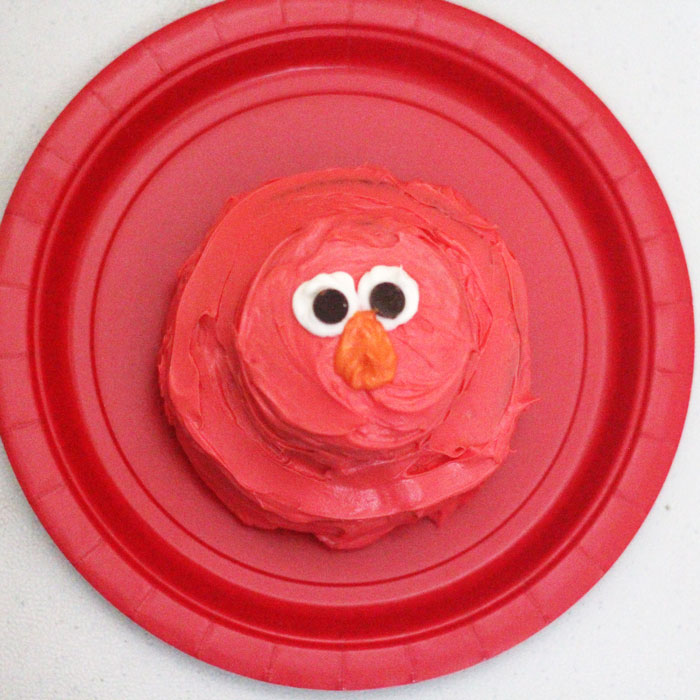 Rounding up the above tutorials, I created a “sweet table” on the sideboard.

I started with three stacks of cups in the center and placed M’s plush Gund Elmo in the center. He did steal it back at some point during the party. (PS  it really added a lot to the decor, and it makes an amazing gift for the birthday child!)

I placed one cakelette on side of the center pillars (did I mention that I made two of those? You can get three out of one box of mix.) I stacked some treat boxes in front and placed the gelatin cups in front (gathered on plates.) You can see that I also had handy red party plates to use for serving things, along with some small plastic dessert bowls.

Eventually, some drinks joined the party, including, of course, Elmo’s punch! 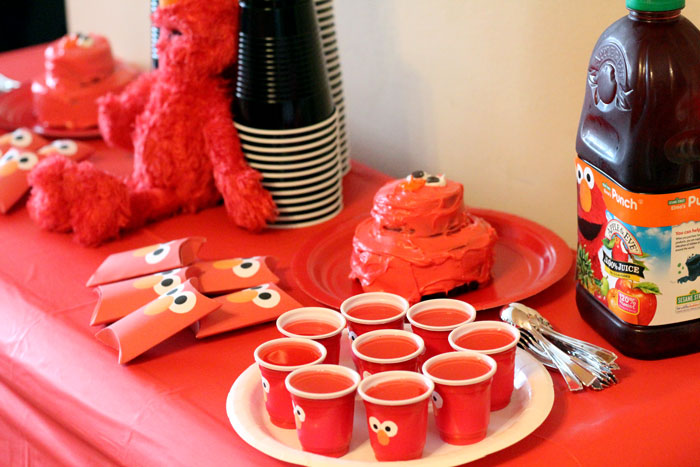 I realized afterward that I should have created some sort of pennant or banner to decorate the wall behind the table (that’s the disadvantage of not knowing the area well where the party is held) and possibly the tablecloth itself. Next time!

We did have plenty of red and black balloons decorating the place, and adding a festive flair. White would have gone very well, and brightened it up. 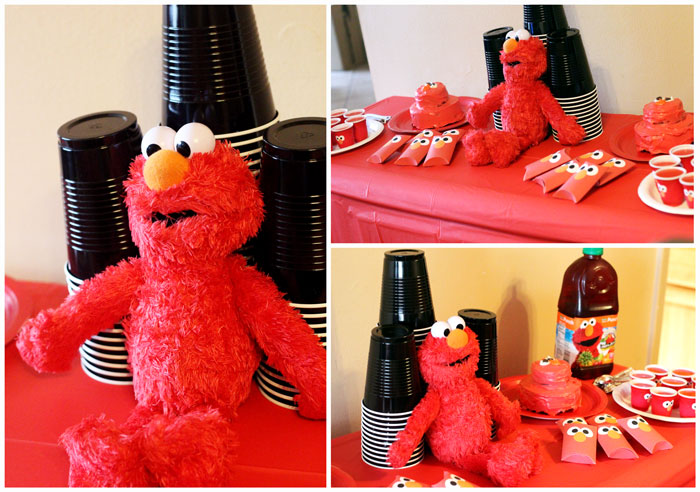 While this was my first “themed” party I threw, and it definitely wasn’t perfect, I learned a lot and think I did pretty well.

To finish off, here are some fun Elmo themed gift ideas (including gifts M got, and some other fun things.)

Got any inexpensive Elmo birthday party ideas to share? Comment below so that others can hear about it! 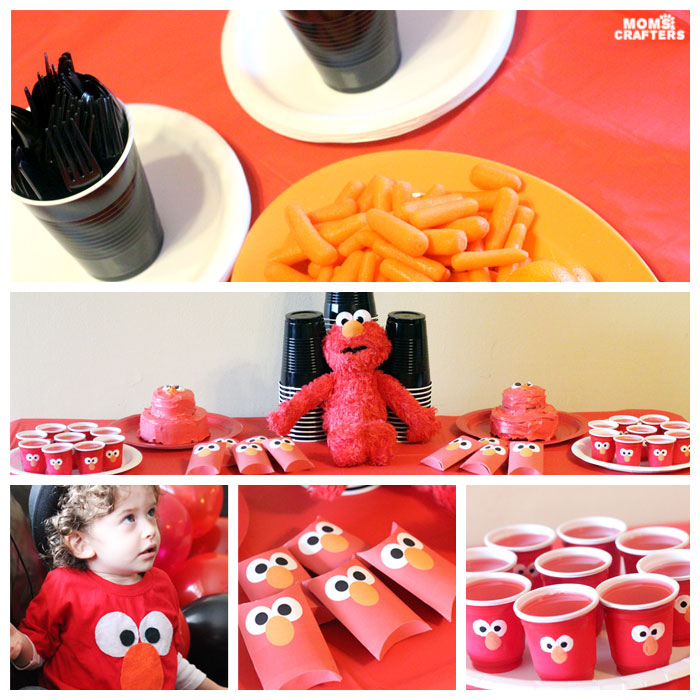 Super cute!!! Thanks for the ideas. We are doing an Elmo themed party and we'll definitely use! Thanks <3