I think that this style vintage sewing box may just be the first “cool craft storage solution” ever invented and I always knew I NEEDED one. So when I found one at the flea market that was old, dusty, and broken, I knew it was the perfect candidate for a DIY “trash to treasure” makeover project. Check out another small-scale doable flea market makeover project – a DIY gallery wall from old frames! Disclosure: This post contains affiliate links. I am a part of the Plaid Ambassador program, where I received the cool paints and stencils used in this project for free in the hopes I’d use them and share them with you.

Years after I created this blog, I realized I should have called it “The lazy crafter” or something like that. (See, I was even to lazy to capitalize that…)

Seriously, though, I really am a lazy crafter and I rarely take on overly complex projects. My signature DIY style is “spray paint and glue something on top” like I did with this stool.

So where does this epic vintage sewing box makeover come in, you ask? 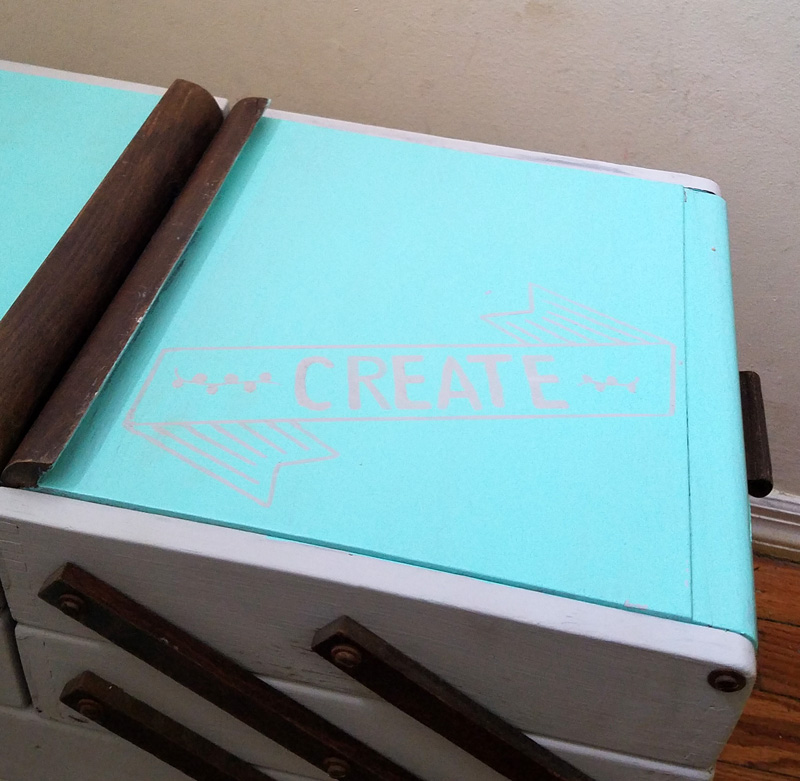 I mean, I totally was not lazy with this one. I dismantled the whole shebang, added three layers of paint to the inside  – and actually waited for each coat to dry before adding the next!

And I stenciled in an epic pattern… 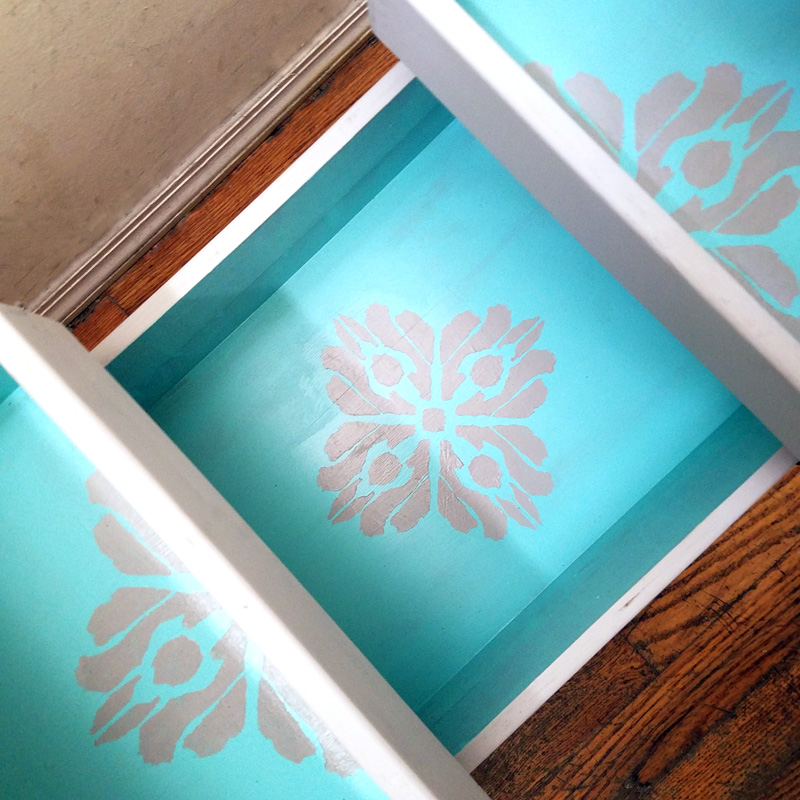 This is how it looked before my transformation: 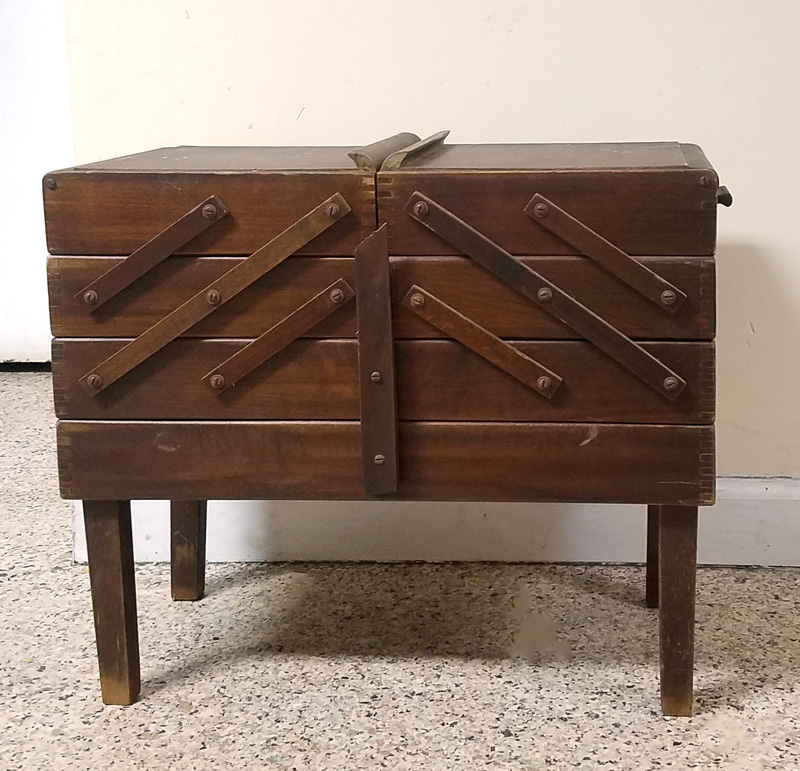 You can see that the handle was broken too and needed to be totally removed. You can’t see how dirty and awful it was on the inside… It was totally a three day project.

It was totally a mistake.

I did not realize how hard this vintage sewing box makeover would actually be. Had I known it would be so complicated, maybe I wouldn’t have started.

The real answer is, when I’m really passionate about a project, I go all the way (yes, that happened with my laptop sleeve, which totally wasn’t a “quick ‘n easy” craft either). This was a passion project all the way. 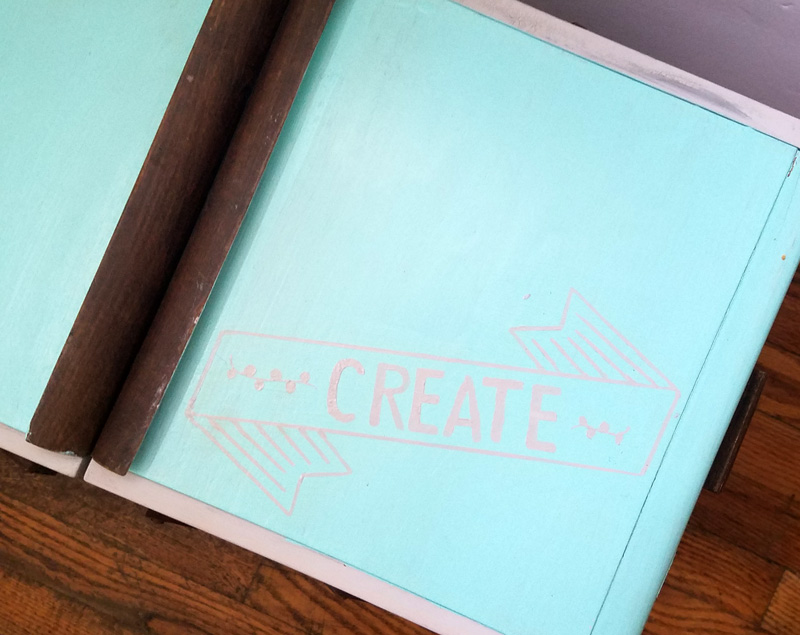 Full disclosure #1:  I will probably NOT be storing sewing stuff in here. I’m thinking it would be cool for coloring tools – books on the bottom, markers in the top two sections. But then again, I just made myself a cool marker storage caddy … so maybe I should rethink this.

Full disclosure #2: This took a lot. of. time. Time that I don’t have. Which means that I was painting coats in while Baby Y was right next to me in the highchair, tossing Corn Flakes onto the floor. Which means that I did lots of photoshopping on the step-by-step process, because no one wants to see the crushed cereal on my floor…

I also do have some finishing touches – just cleaning it up on the edges a bit, but I decided to go ahead and share it meanwhile… 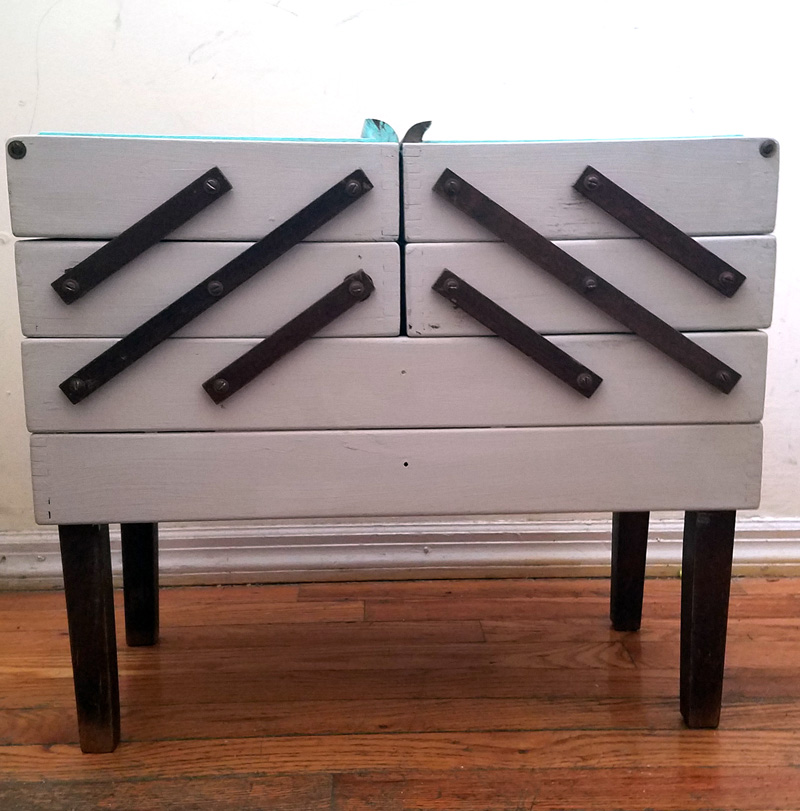 I wanted to show some respect for the original wood finish (which was far from beautiful – it was seriously drab) so I left some of those intact as accents. It provided great contrast for the finished vintage sewing box as you can see above.

I knew I might not use it for sewing, so I stenciled in “Create” on the outside to leave it open-ended. 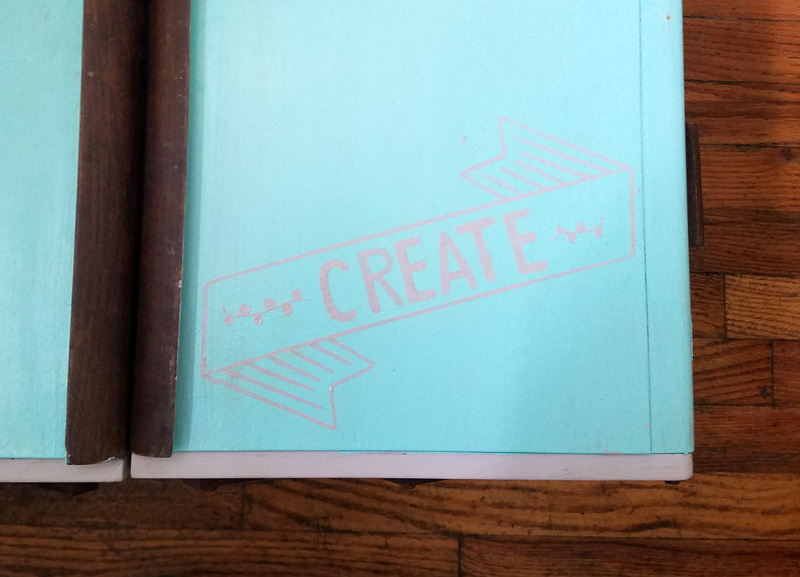 The paints AND stencils I used are from Plaid’s FolkArt line.

The paint colors are Cabana and Light Gray – I like the subtle contrast, but if you want something stronger, choose colors with more contrast.

I used up the entire Cabana – mainly because I had to do multiple layers because I didn’t prime the inside – and about half the Light Gray.

The text stencil is from the FolkArt Mixed Fonts Lily and Val pack and the inside was done using the Ikat Motif stencil. 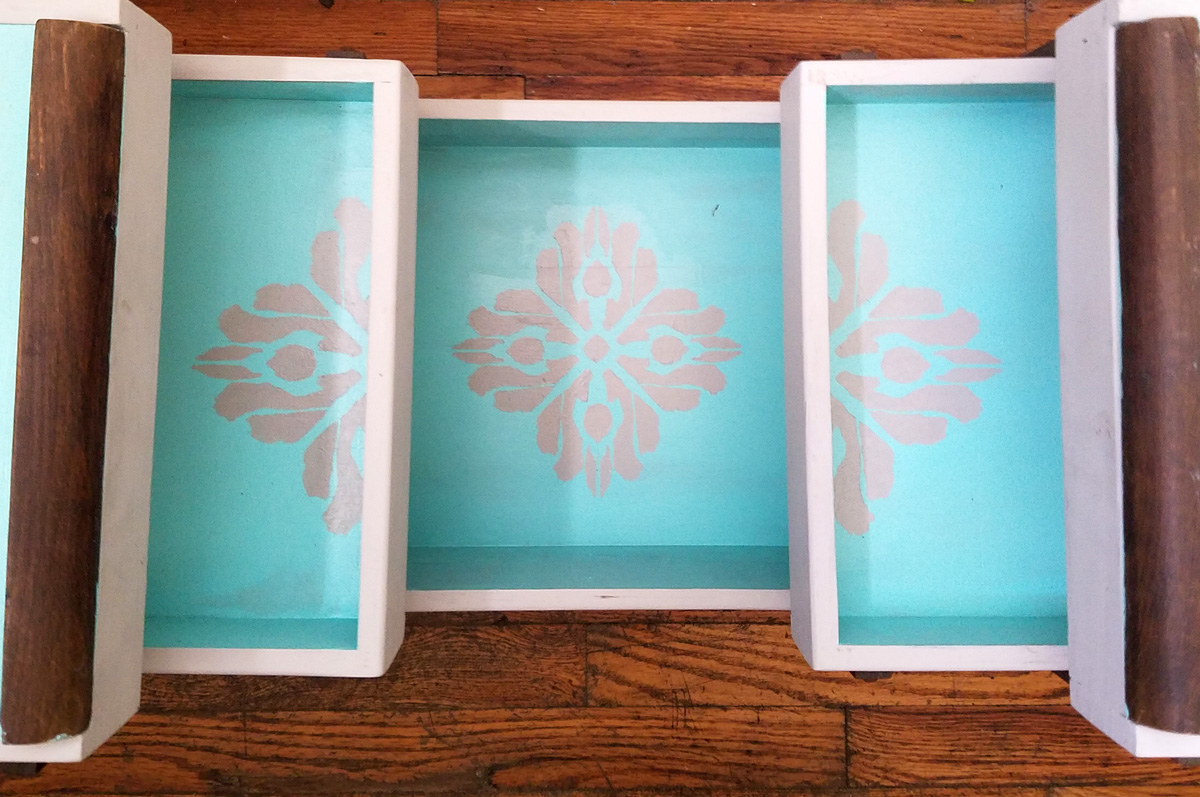 Alright, ready to see the surprise inside in action?? Watch the video below and see how cool the stenciling on the inside is. Granted, this was my first time using a stencil, and I had to chop it in half for this, but it was worth giving it a go!

What you need for this vintage sewing box makeover:

How to make over a vintage sewing box:

1. Using a damp rag, clean off your vintage sewing box inside and out. 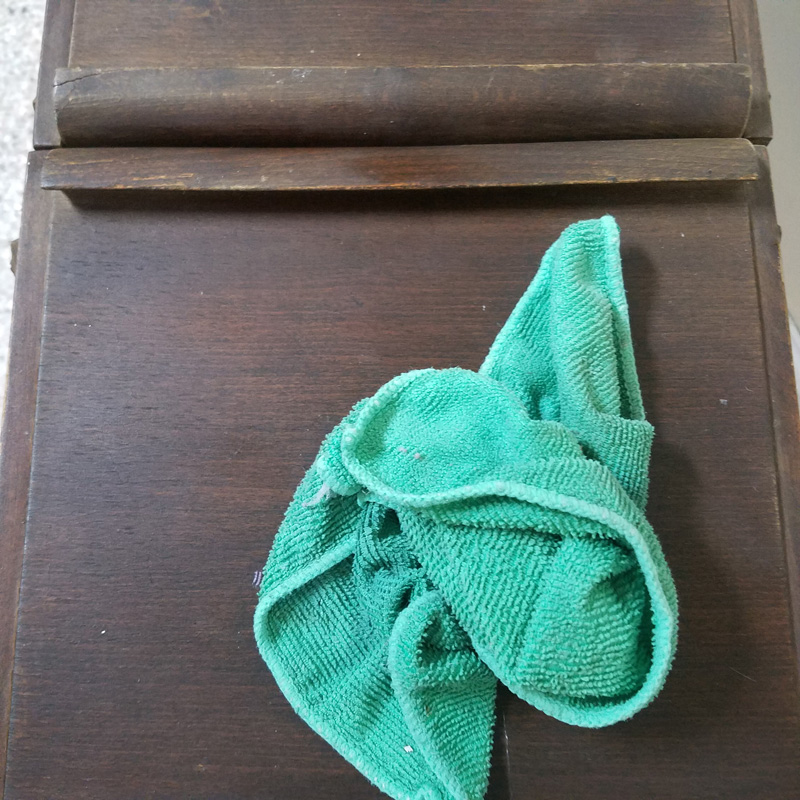 2. Take the whole shebang apart. If yours has slotted screws like mine did, you will learn never again to take advantage of the person who invented the Phillips screw (was it someone named Phillips by any chance?)

I left the legs intact, mainly because I didn’t know how to remove them. And I chucked the broken handle.

Place all your parts in a bag and remember where you put it. 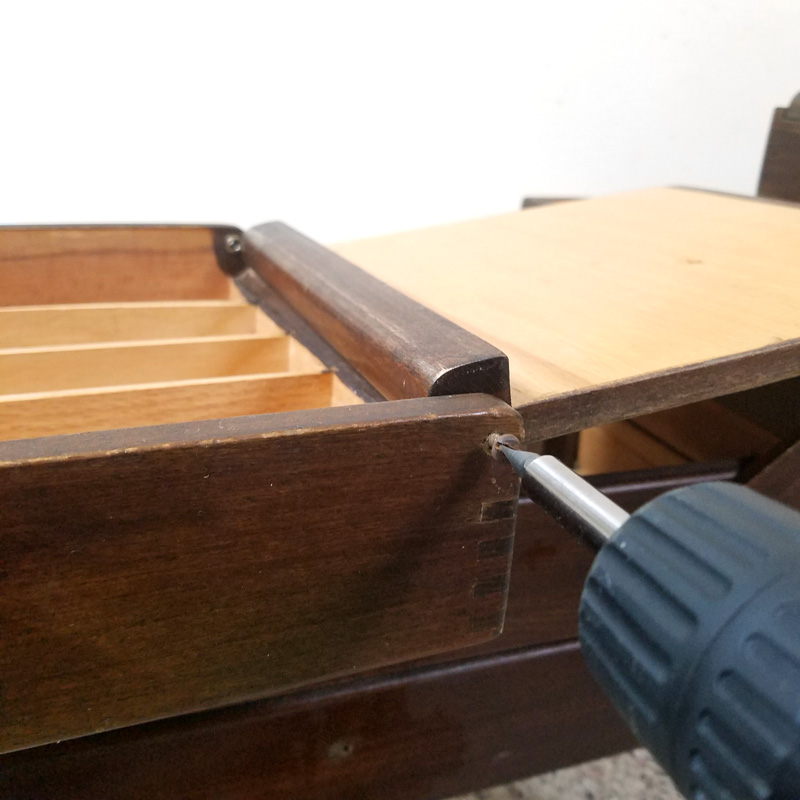 3. Tape off any parts you plan to leave unpainted. I WAS  bit lazy here, only taping off the parts I thought I really couldn’t avoid with the brush. 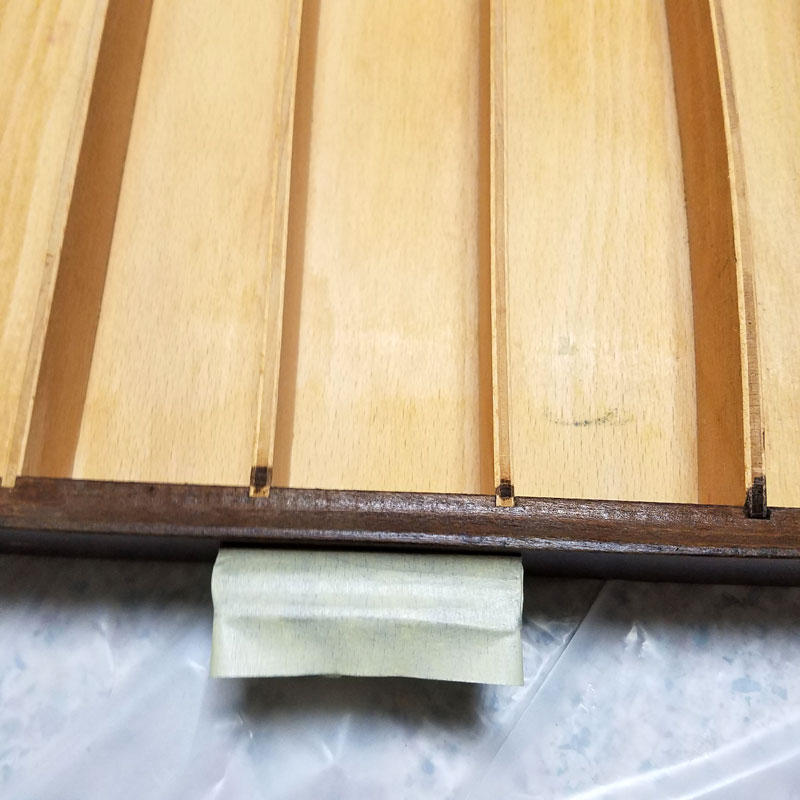 4. Paint the outside of your vintage sewing box in one color, avoiding the accent areas you plan to leave intact. I did this with all 3 tiers – the main body, the top compartmentalized parts and the center part. 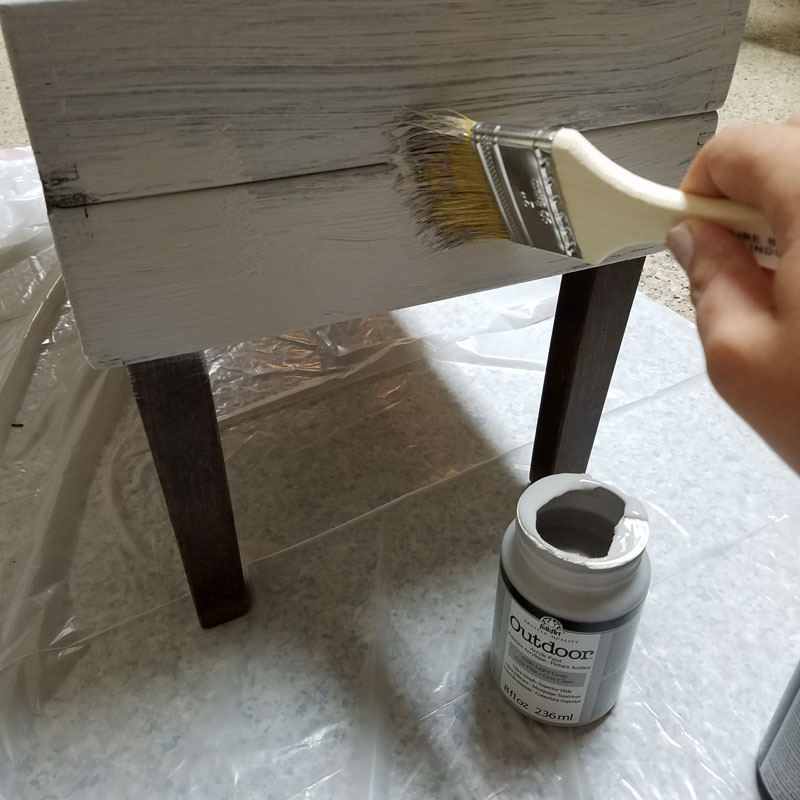 5. Paint the top your accent color, once again avoiding anything you want to leave as is. 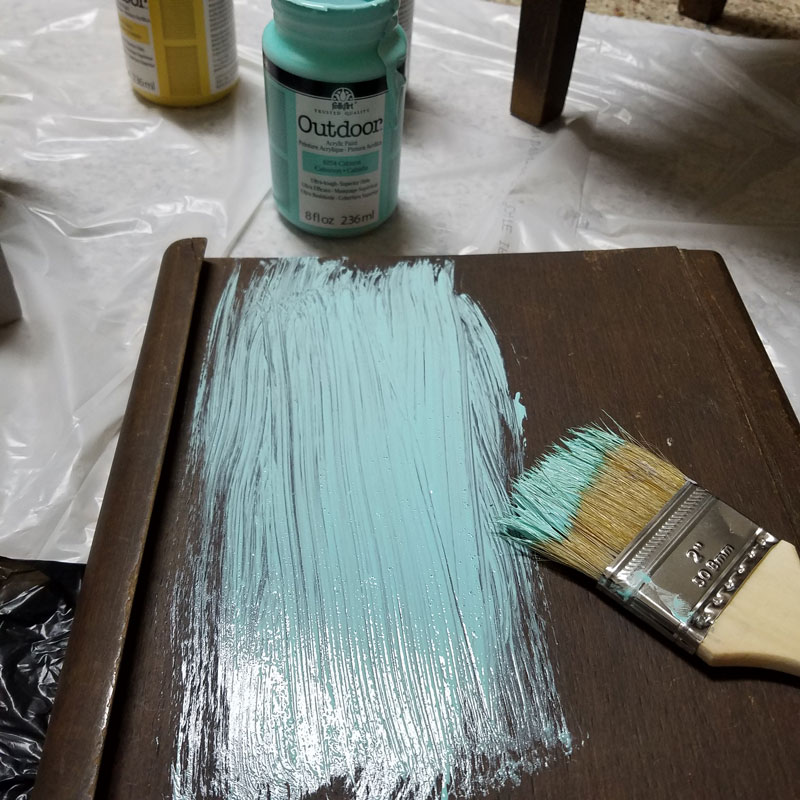 6. For some reason, this color needed a few coats, whereas the previous was good with one coat. Paint as many coats as you need for the finish you like. 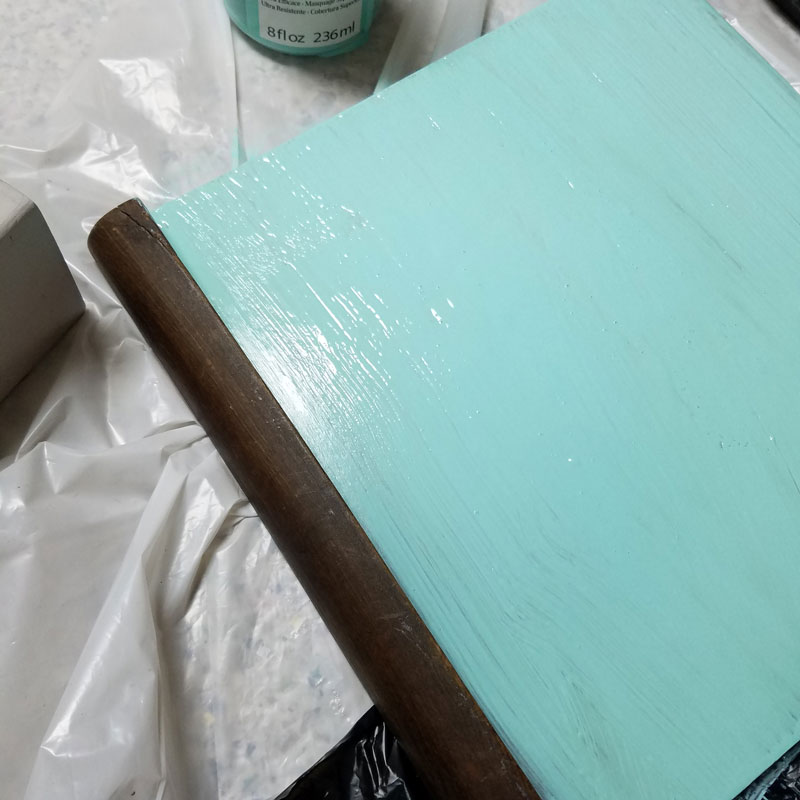 7. Now paint your inside. Okay, I PROBABLY should have used a primer first, since the inside was totally unfinished. So I did 3 coats of paint instead… Go into the corners with a smaller brush. 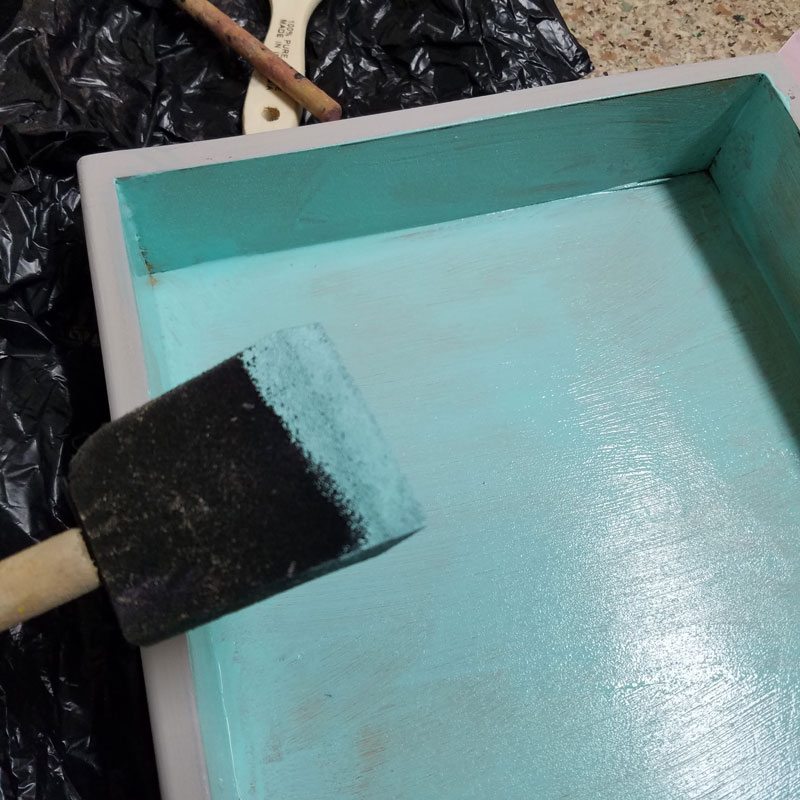 8. All your parts should now be painted to an opaque finish, inside and out… Touch up anything that needs to be fixed. I had paint drips down the legs that needed to be removed as well. 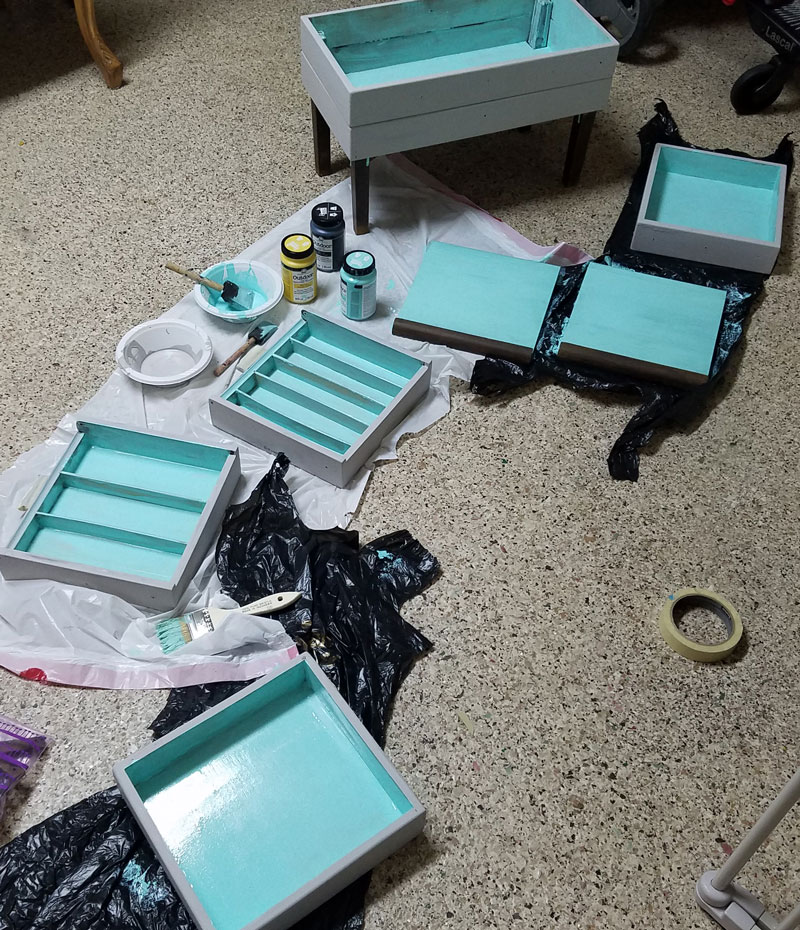 9. Time to stencil your vintage sewing box! Line up your two middle sections as they would be on the finished box. 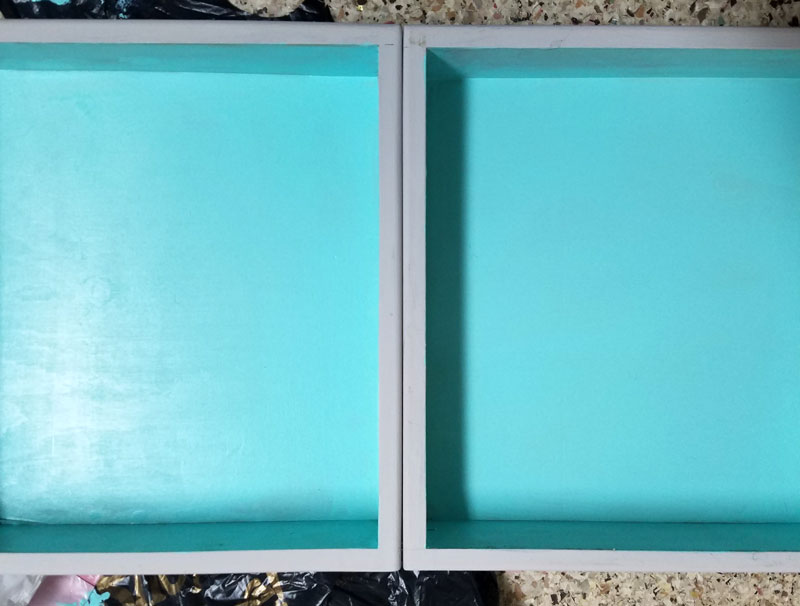 Snip the stencil you plan to use on the inside straight down the center. 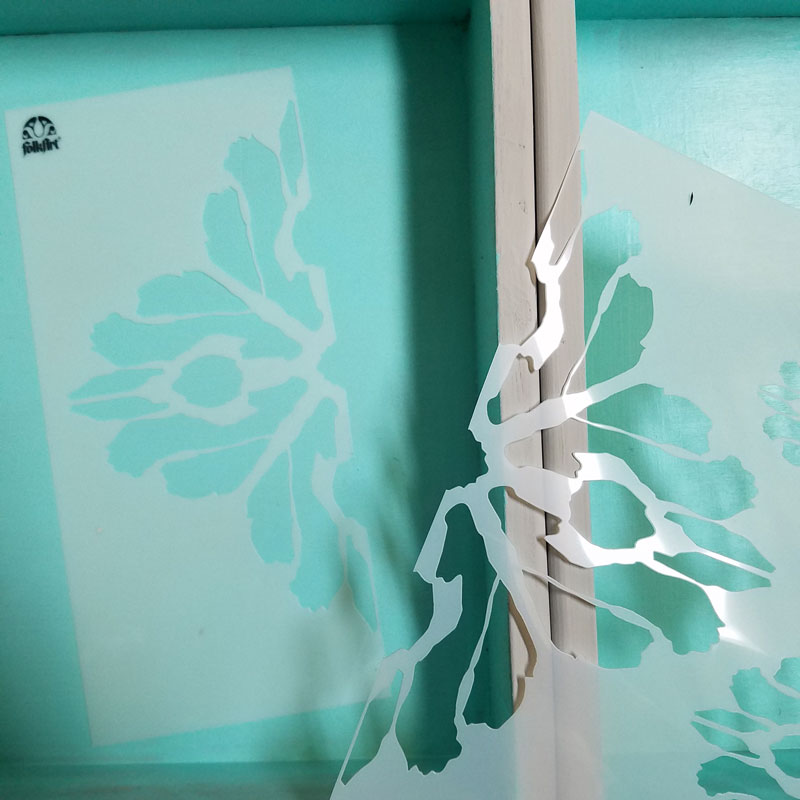 And then tape it flush against the inside wall, as pictured. 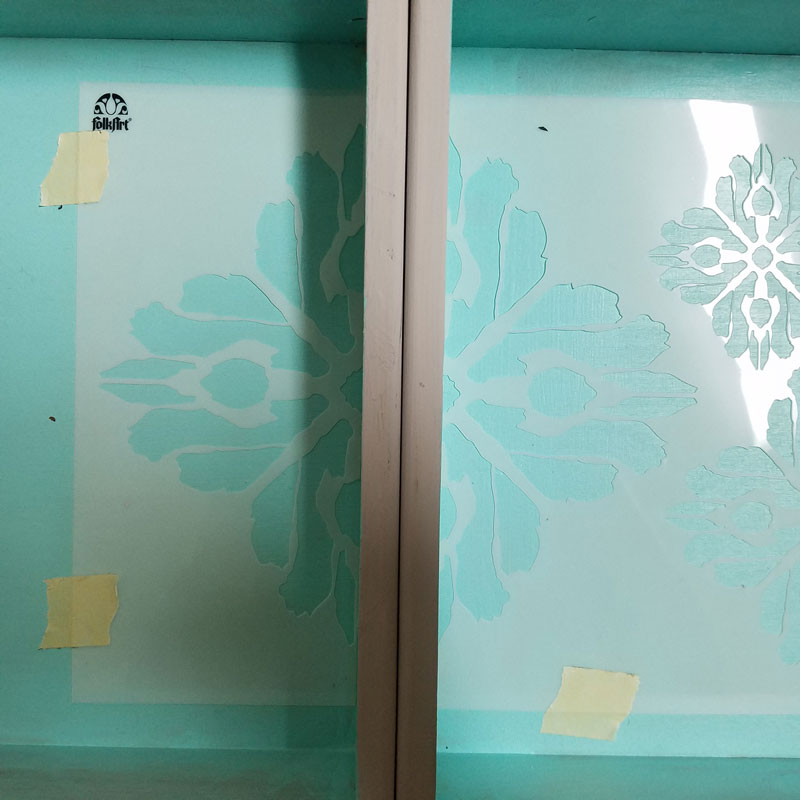 10. Using a dry brush (clean as much paint as you can off it), start stenciling! 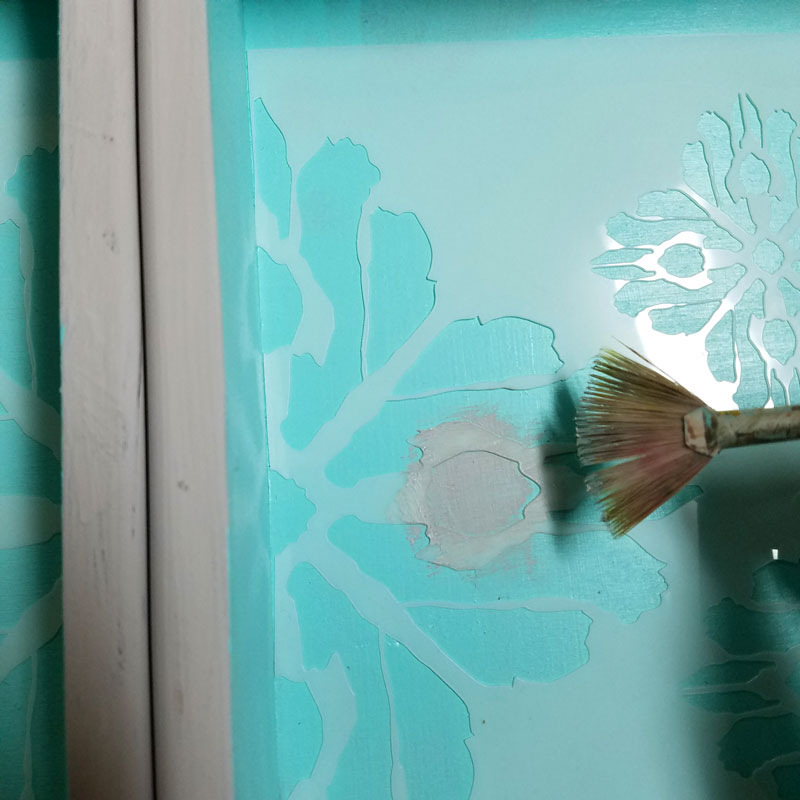 11. Remove your stencil and touch up where needed with a very fine brush. I needed very little touch up – mainly along that inside wall where I wasn’t careful, and where I had my brush loaded up too much. 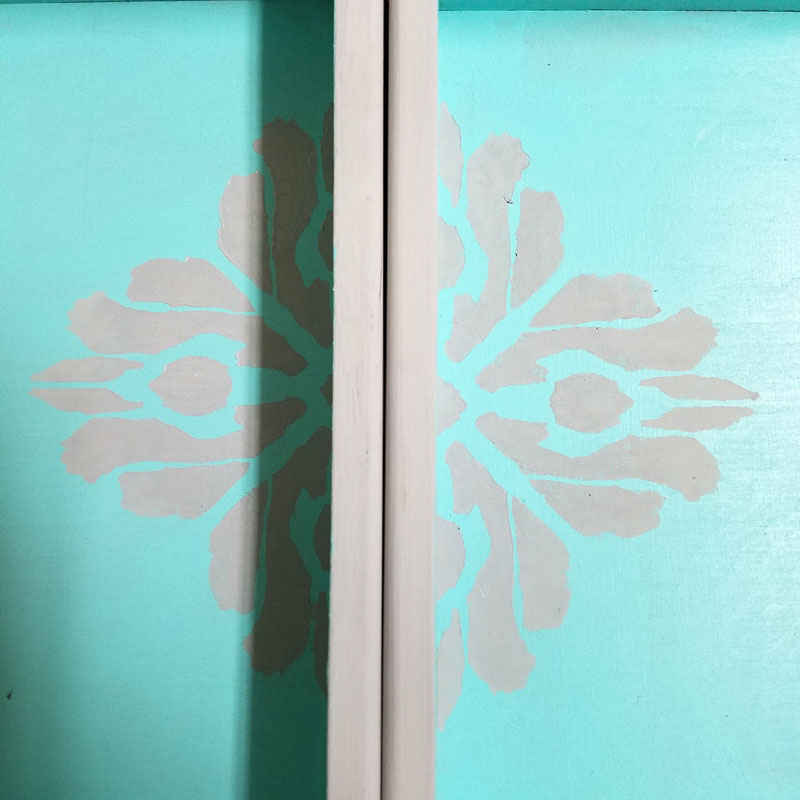 12. When you’re finished, seal your design with a coat of Mod Podge. Alternatively, you can seal your entire project (I like when it shows some natural nicks and bangs so I didn’t do that.) 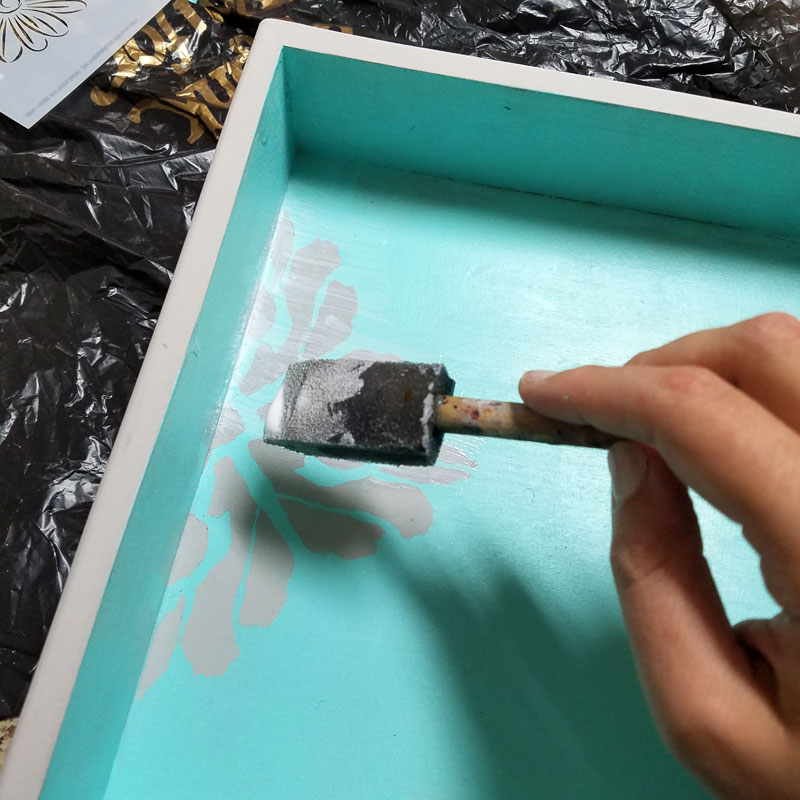 13. Time to stencil your main box! Granted, it may have been wiser to do this first, but I did want to measure it up against the finished middle section. Place one  half of your stenciled middle section on top of your base section of your vintage sewing box. Tape down the opposite half of the stencil so that it matches up nicely with the design on the middle part. 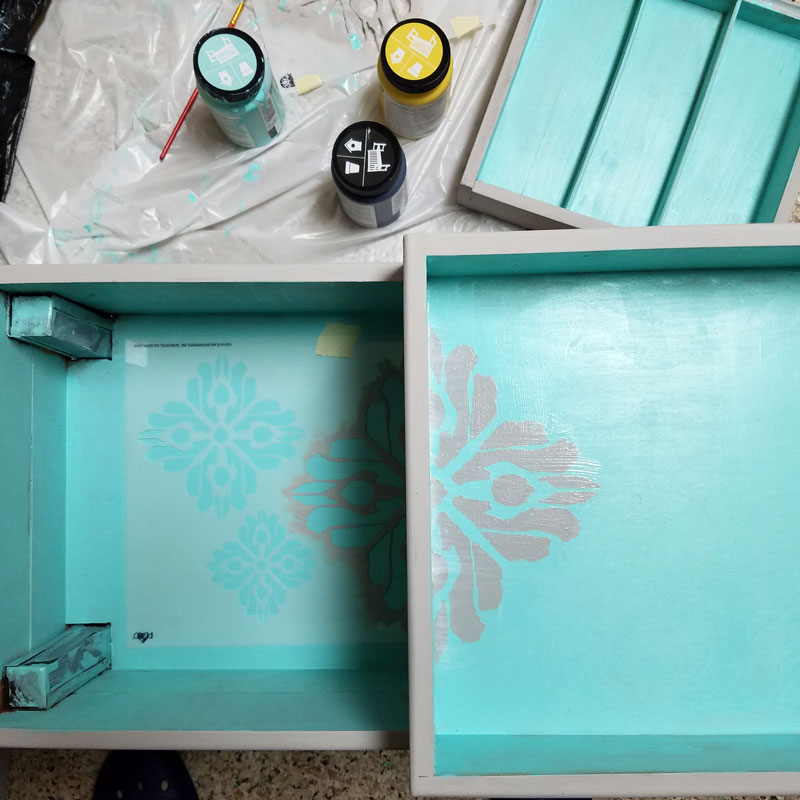 And then carefully match up the other half of the stencil that you cut. Stencil in your design as you did above. If you didn’t line the two halves perfectly, you may have a bit of touching up to do afterwards. Once it’s dry, seal your design with Mod Podge. 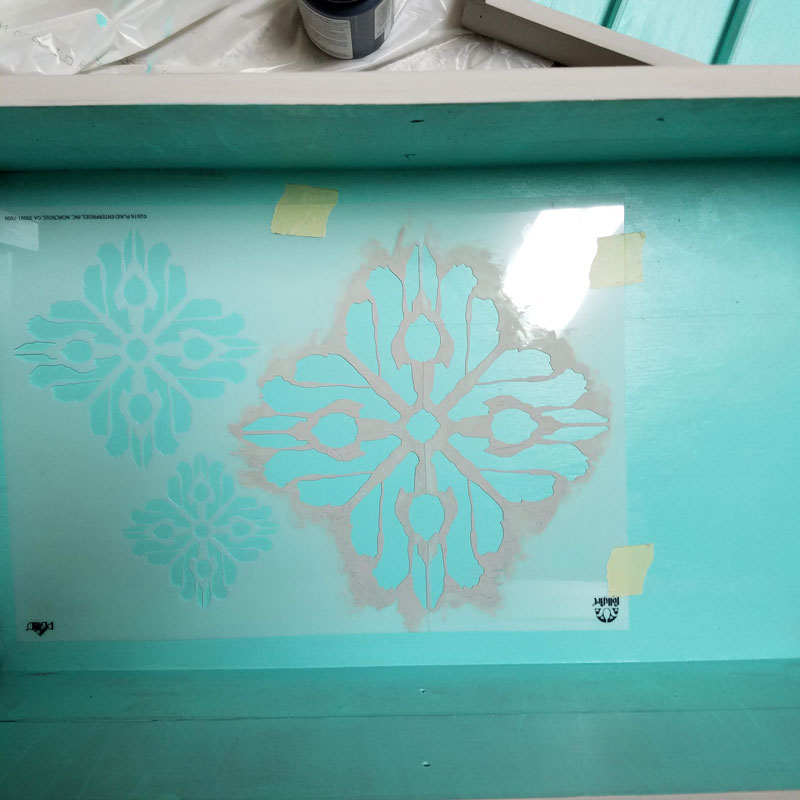 14. Now for the fun part – the lid! Start by stenciling your banner design. 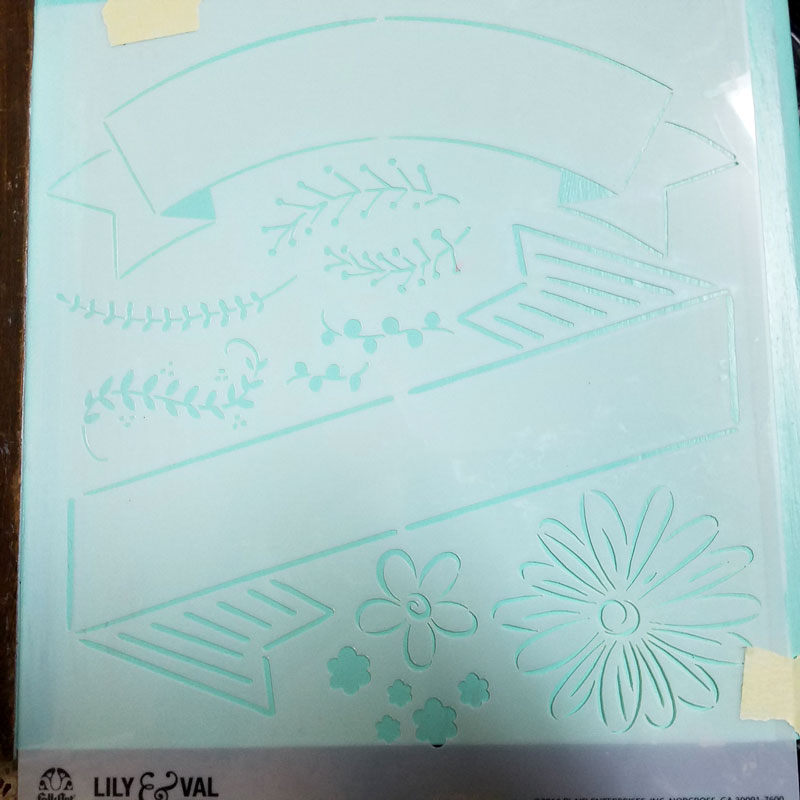 15. Touch it up and close the open parts with a very fine paint brush. 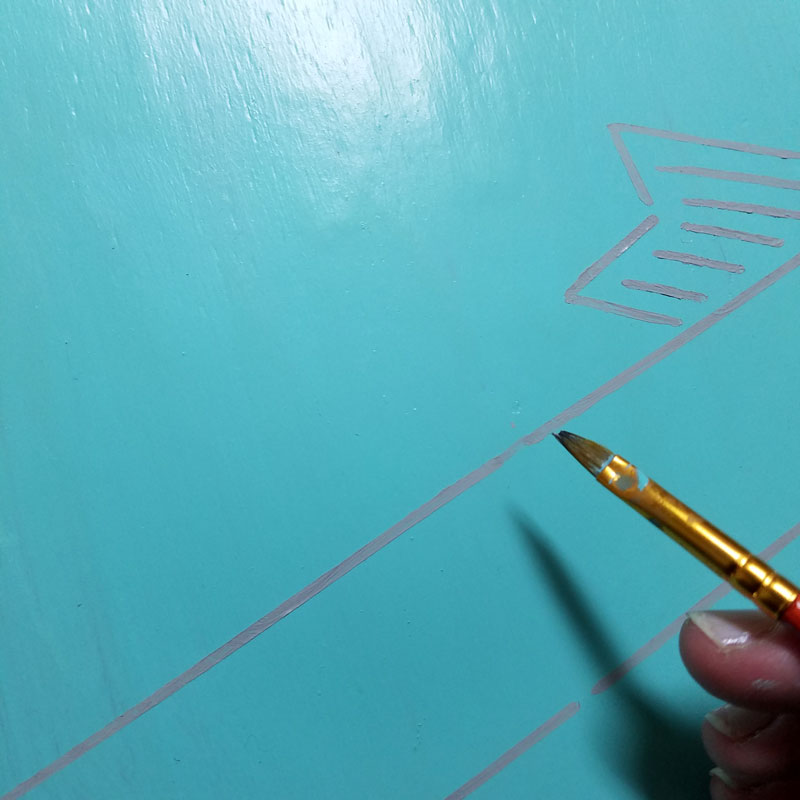 16. Start stenciling in your letters. You might want to chalk them in first just in case – I just winged it and it’s a bit off center but still looks great. (I mentioned I’m a lazy crafter, didn’t I?) If you want, connect the disconnected parts of the letters with a fine paint brush. 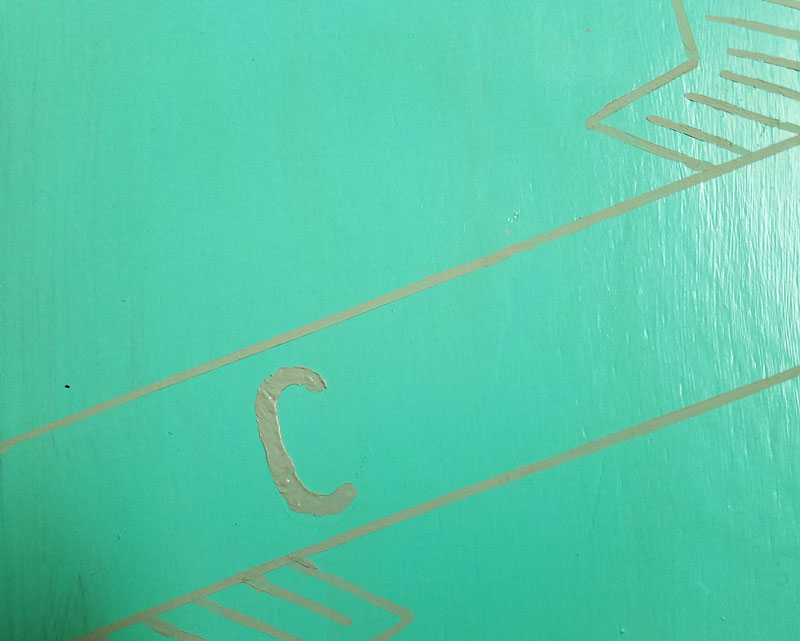 17. Finish it off with a fun little design on either side of your letters, stenciled in as well. I used this to balance my slightly off-centered word.

18. Time to reassemble your vintage sewing box! Start with the lids. Then, stack up your 3 tiers. 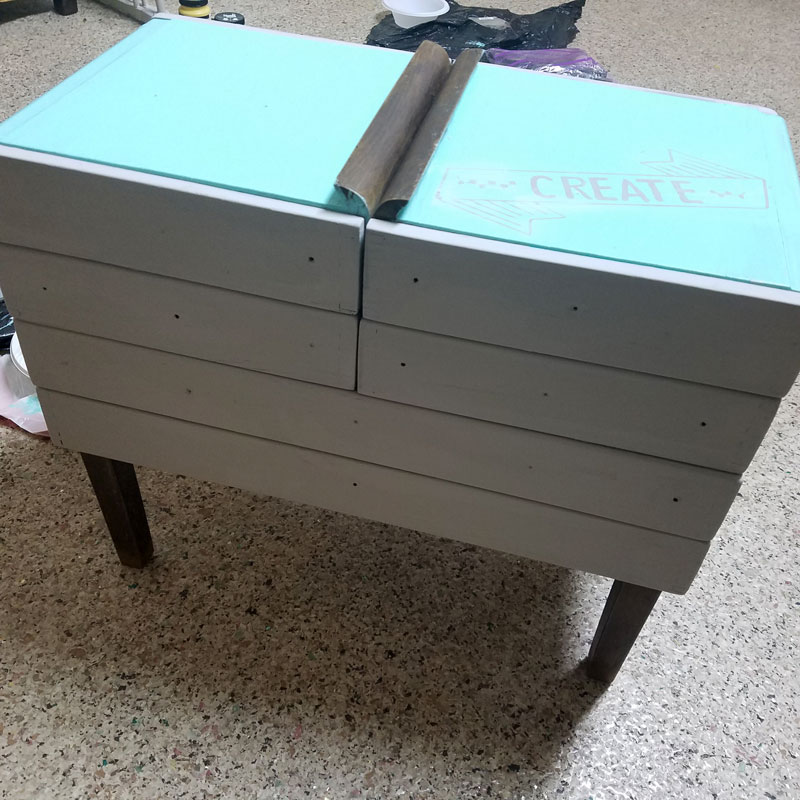 And put all those screws right back in. Easier said than done… If you want you can replace your screws with something newer and fresher – but I didn’t. 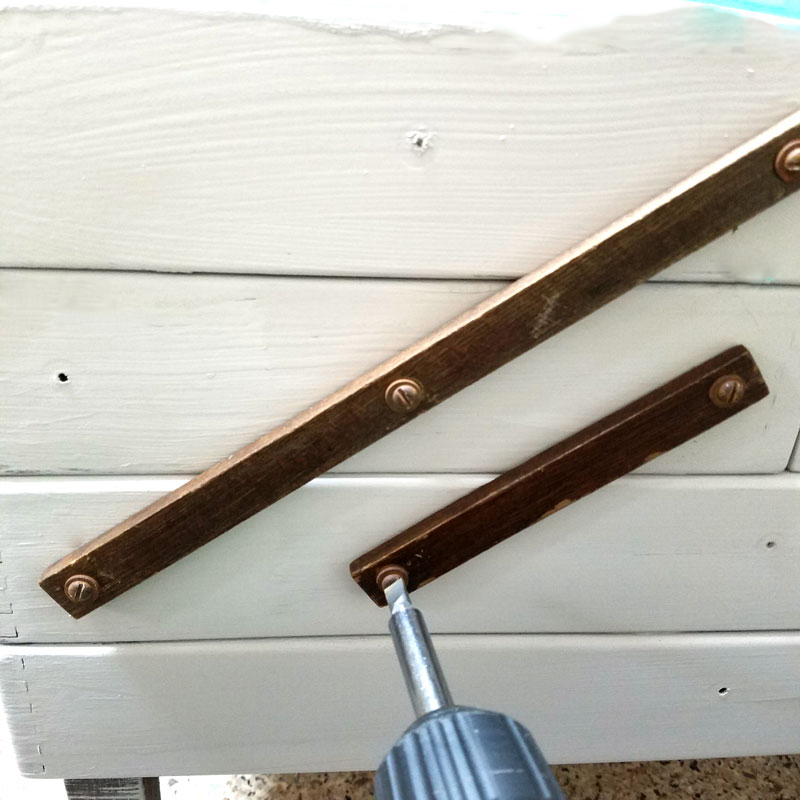 And that is all. Your vintage sewing box is ready to go… 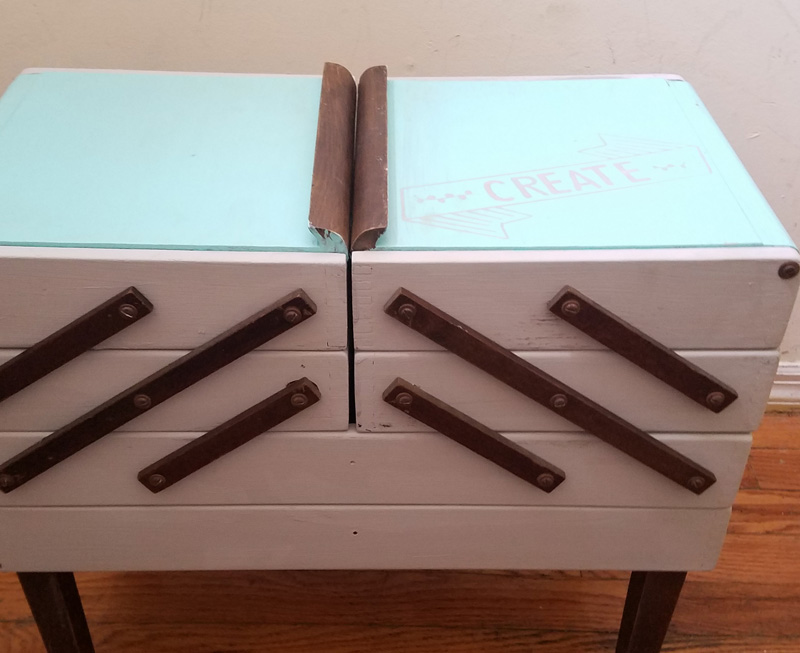 What was your favorite flea market makeover that you’ve ever done? What do you think I should store in this vintage sewing box? Comment below!

Thank you for this post! I love what you did with this sewing box!!! I just found one that had been hidden away at my MILS home and I now own one very similar! Do you think this would be a good makeup or jewelry organizer? Thank you!

Hi Daphne, I use mine for acrylic paints, not sewing so it's definitely versatile! It really depends on how much you have! The compartments may be a bit large/rough for jewelry (unless you fit it with foam padding) but I can see makeup working there if you have a large collection.