Make this beautiful winter lantern in a jar to brighten up snowy scenes and your winter decor! 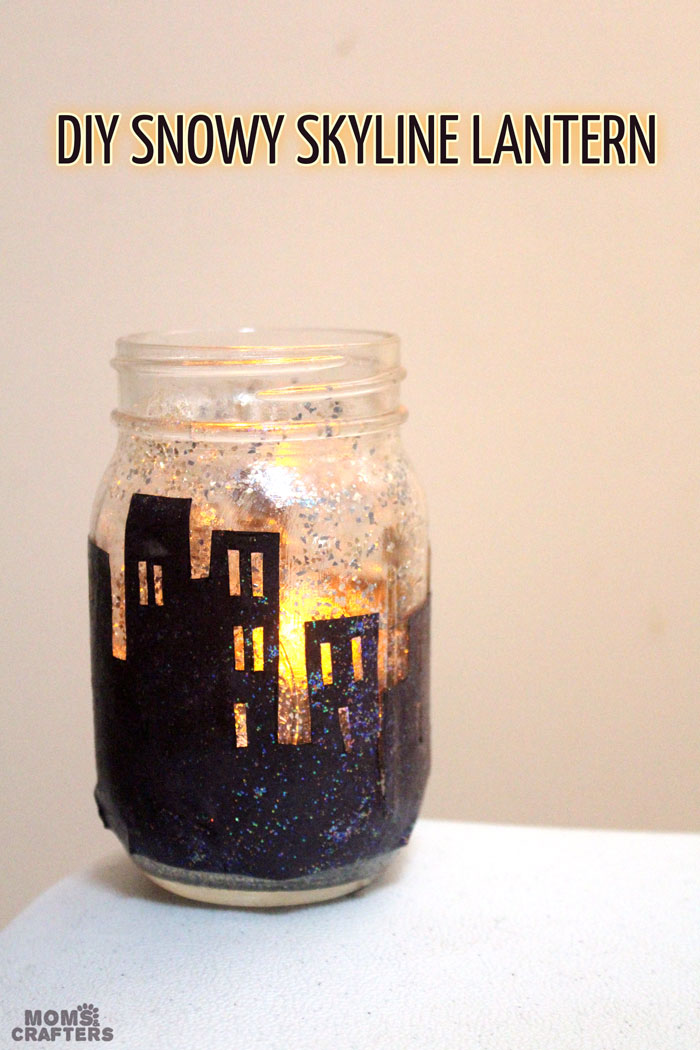 CONFESSION: When I create a craft, it doesn’t usually come out as I had originally intended. One of four things usually happens:

This winter lantern falls into the third category. 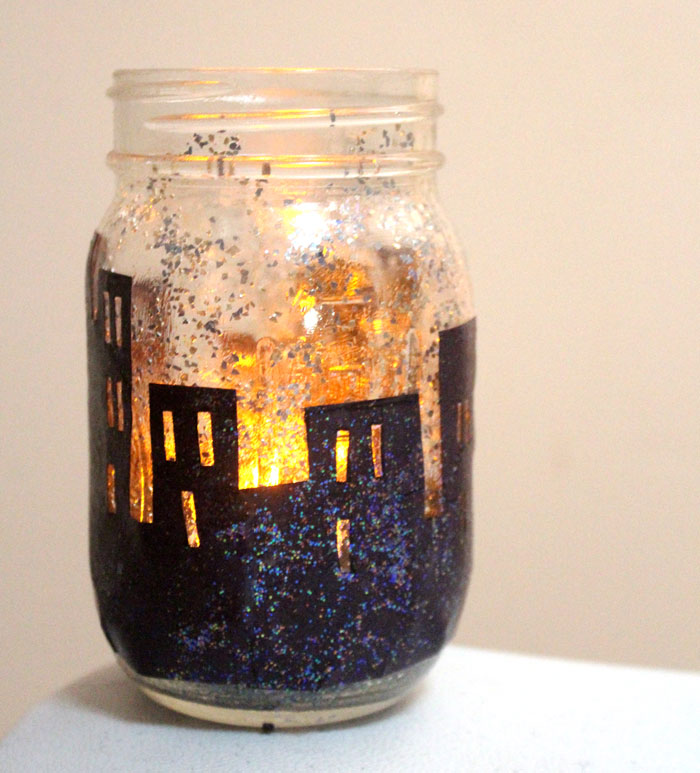 While aiming to bring you as much as possible to make your holiday planning for BOTH Hanukkah and Christmas a success (more will be coming soon) I’ve been neglecting a little bit to bring you these fun, non-holiday-specific crafts that work either year round or just for the season. I do have plenty more up my sleeve – so don’t worry, we’ll be back with the usual simple, easy crafts soon!

Meanwhile, this winter lantern is a simple and fresh craft idea, to warm up those cold days. (“Which cold days?” you might be asking if you’re also experiencing seasonally warm weather.) 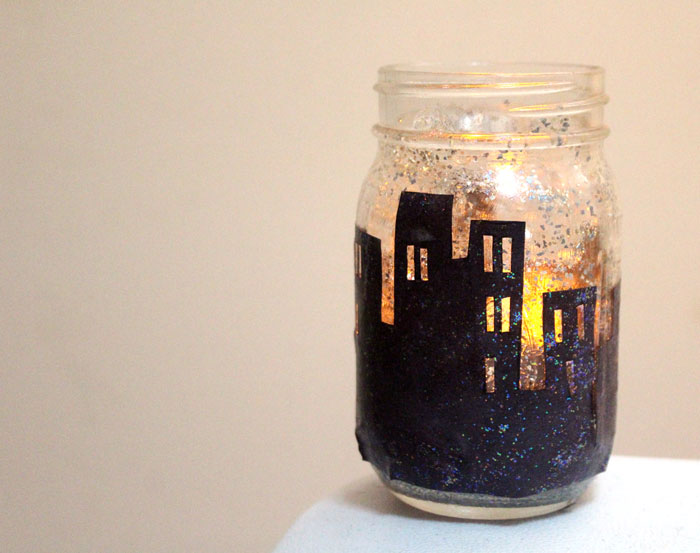 I wanted to create a “snow globe” type of effect, but lit up, and with the snow perpetually falling. The idea was to have the glitter decoupaged to the jar, but heavier at the bottom, so that the snow looks piled. I then wanted a silhouette of a skyline, with holes that the lights can shine through – as if some windows are lit up.

The big issue that I encountered was that the silhouette I created was extremely difficult to insert into the mason jar once I added the decoupage. It was starting to tear, so I gave up and put it on the inside. The result is that you can’t see the “piled” glitter on the bottom. However, using glitter Mod Podge allowed there to still be a sparkle over the building, and you still have the light shining through the windows that I had envisioned.

Also, because I hadn’t planned it as well as I should have, I didn’t “taper” off the bottom enough. The decoupage was drying, so I just glued it on. Ideally, I should have made longer slits along the bottom, and glued each flap down individually, to go smoother along the curved base of the jar.

Another small setback: I originally started with a mason jar with just the band of the lid. That way it had a polished finish, but an open top. But I lost the ring, so I was left with an open jar. 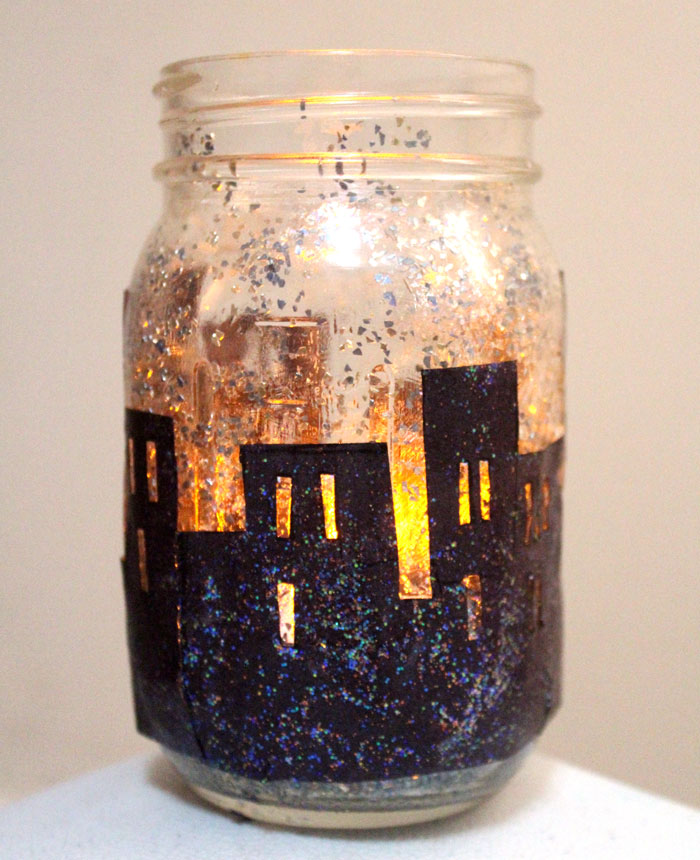 I originally intended this winter lantern to be a project that I do alone, but in the end M helped me with the decoupage… It’s not really a toddler craft AT ALL but it was sweet that he helped.

Technically, this winter lantern can serve as a votive holder, except that the glitter inside would make it a less-than-ideal place for a candle… Especially if some of the glitter comes loose. Therefore, I put in flameless tea lights (you can aim for a votive instead to lift it up a little…)

What you need to make a snowy winter lantern:

How to make a snowy skyline winter lantern:

1. Spread a layer of glitter decoupage on the inside of your jar. 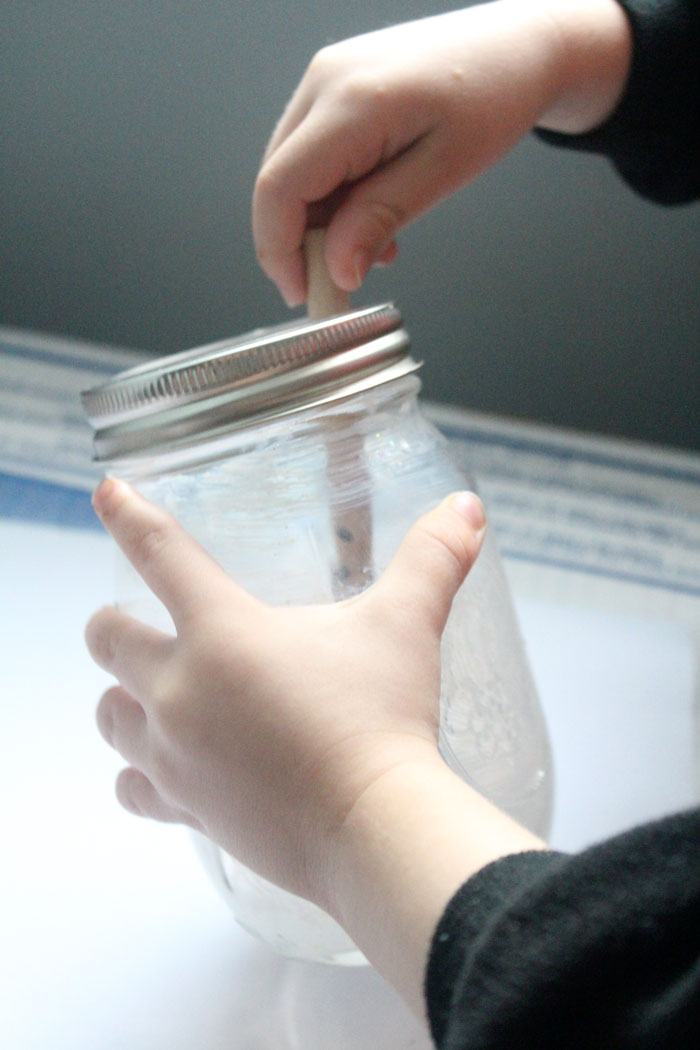 2. Pour in some glitter. Because of my original intention for this craft (see above) I dropped it on the bottom and added a little bit to the top area. You can just spread a thin layer over the top half of the jar. 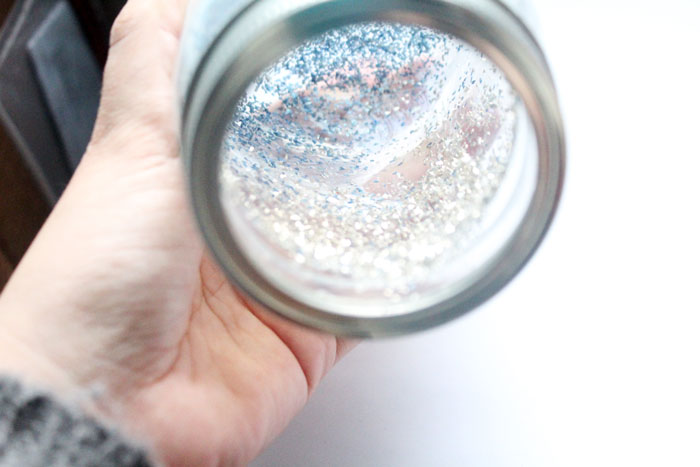 This is what it looked like from the outside before it dried. 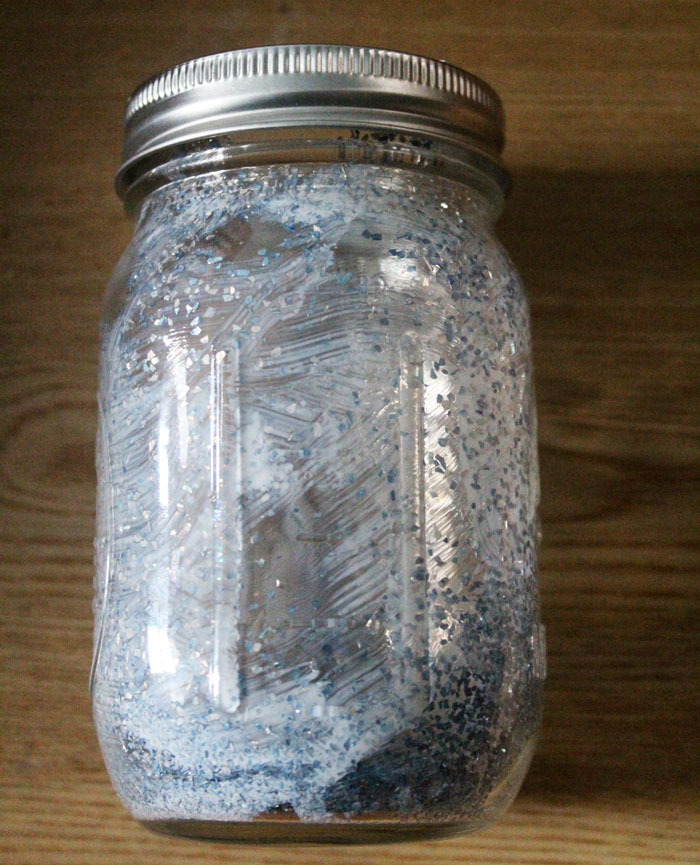 3. Print out the skyline template. 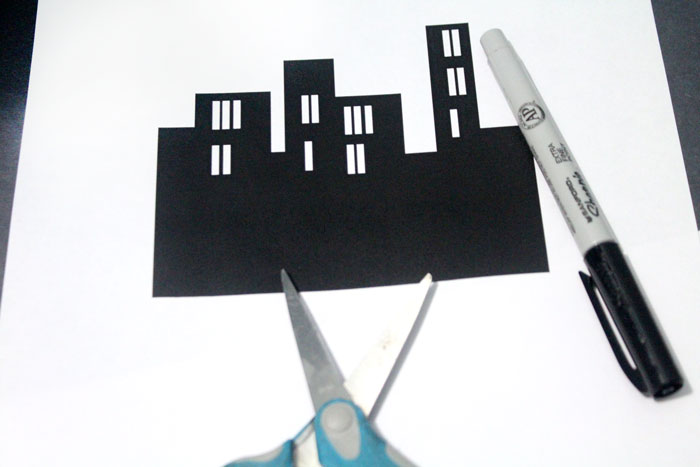 4. Cut it out. A craft knife can help you get into those windows. 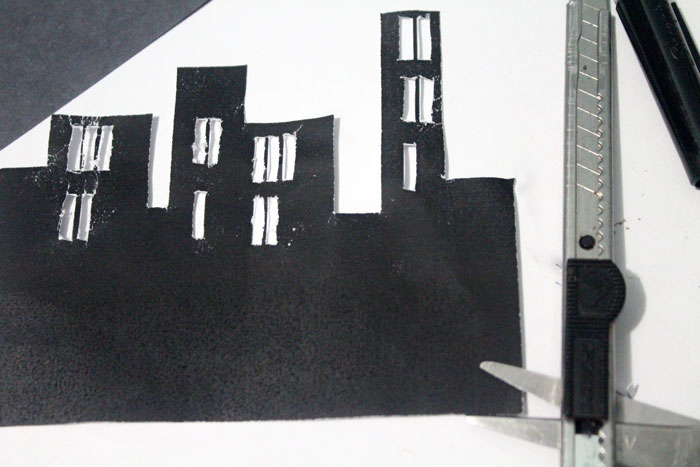 5. On your black/charcoal paper, mark how long your skyline needs to be to wrap your jar. Then, trace your skyline, or parts of your skyline, including some of the windows. I varied different parts of the template, and not all the windows, so that I didn’t have a repetitive pattern. Keep in mind also how high you want your skyline to be. 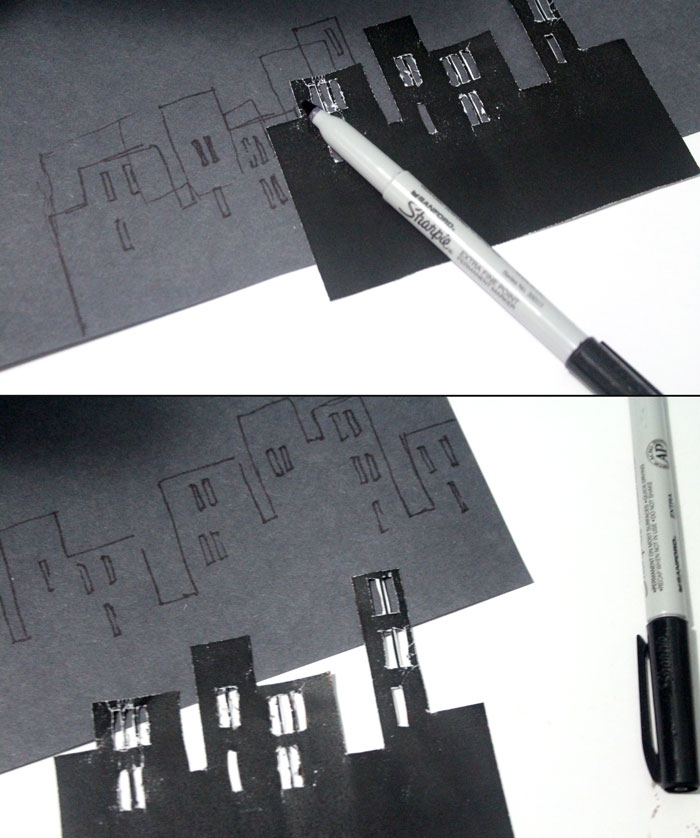 6. Cut out your skyline with the help of a craft knife. tip: as you can see, on my template the windows did not cut out neatly, but on my full skyline it did. That’s because I allowed the windows to be slightly more spread apart. 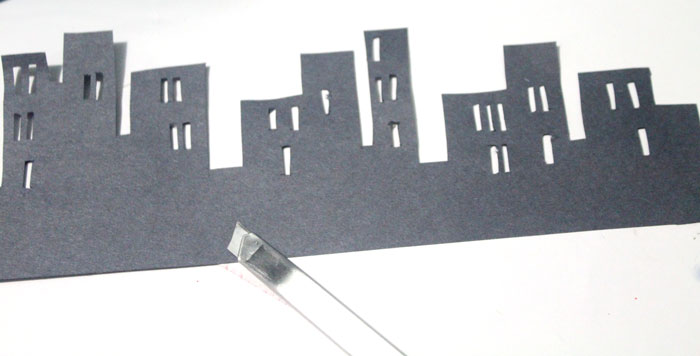 7. Cut slits along the bottom of your skyline. 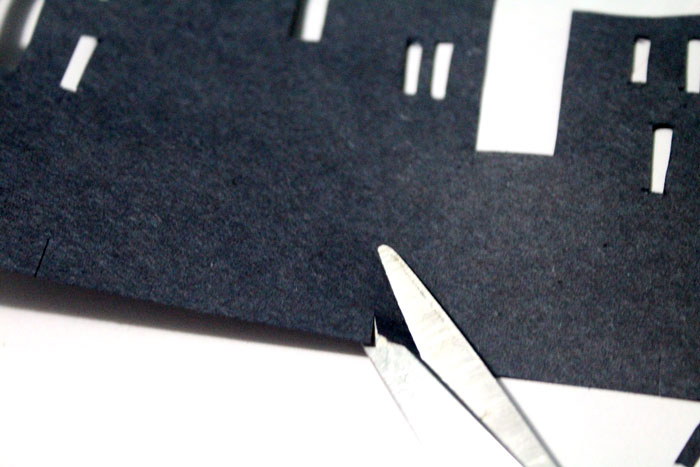 8. Spread a layer of decoupage on the back. 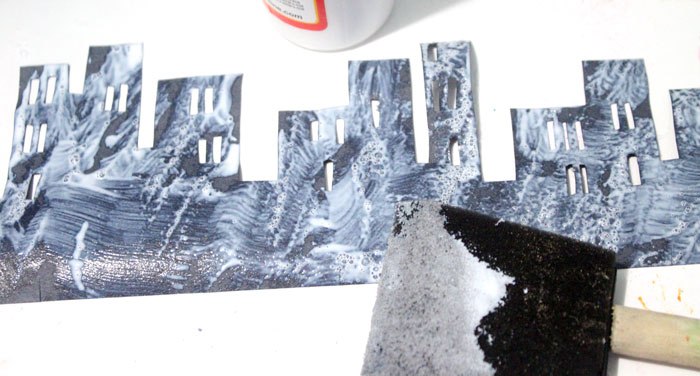 9. Wrap it around your jar, taking care to fold down the bottom, using the slits you made to allow it to curve. 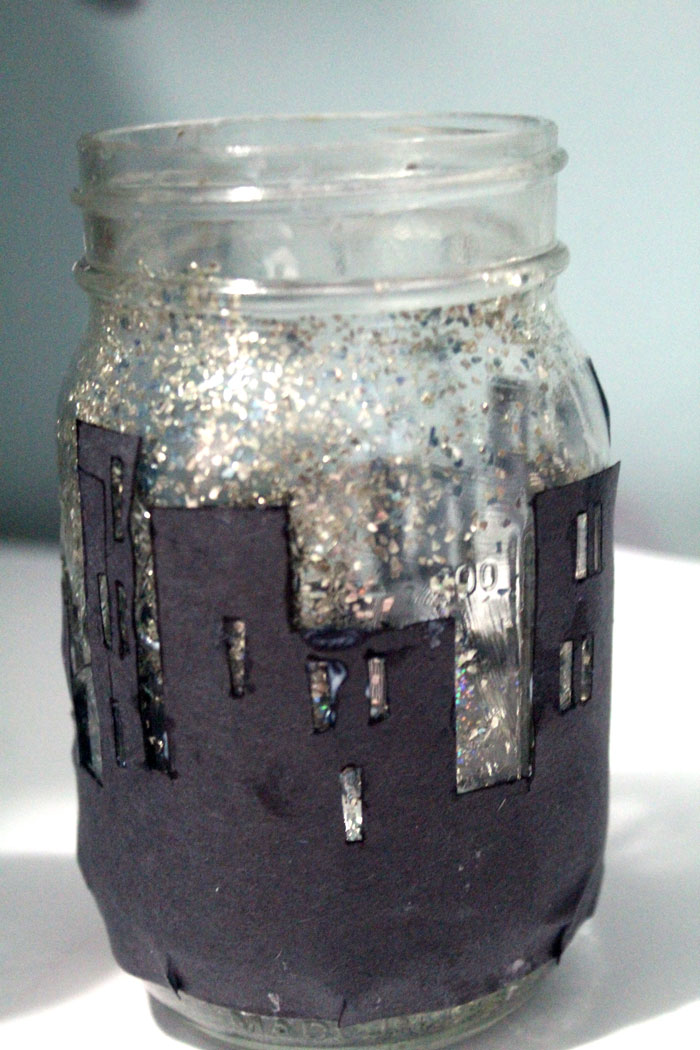 10. Spread another thin, even layer of glitter decoupage, this time making sure to remove all air bubbles. Allow it to dry completely. 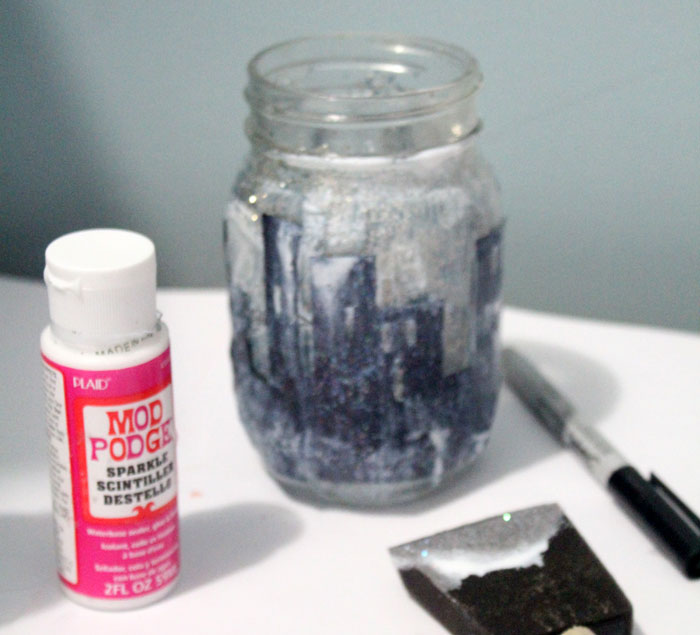 As you can see, it’s not very exciting as “just a jar”, which is why I almost didn’t share this craft. You can’t see much of the skyline, and it’s really not that pretty. 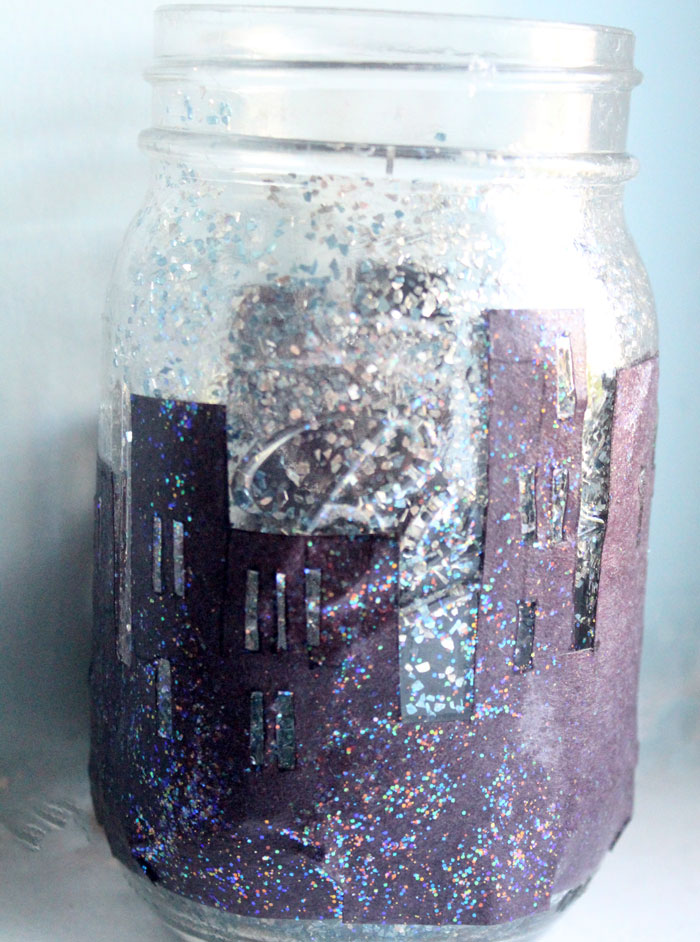 But, once you add your flameless candle, your winter lantern lights up and looks beautiful! 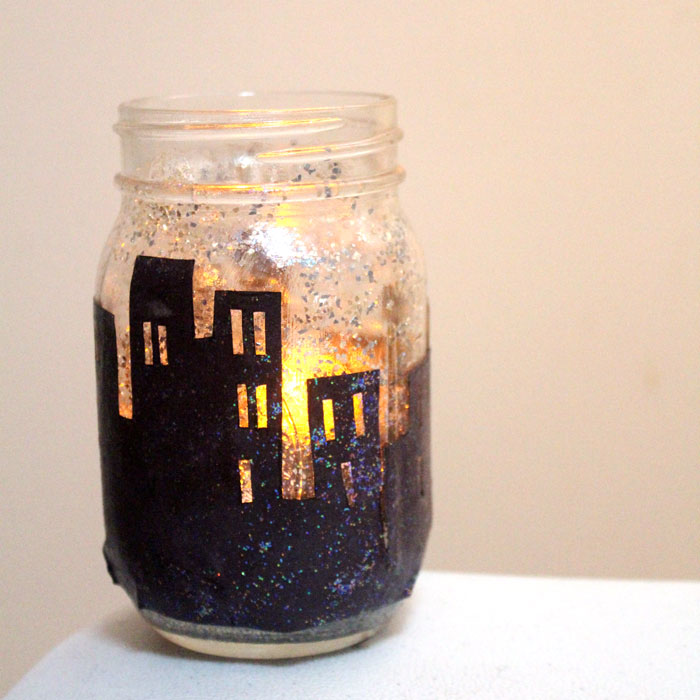 How I love to see your craft... Thank you for sharing