Now that I shared with you the monster craft invitation and the monster treat bag toppers from Y’s third birthday party, it’s time to share with you some DIY monster party decorations! This post contains commissioned links.

My goal is to turn it into a special day every year to celebrate having this child in my life. However, I don’t believe that I need to spend a lot to do this.

That’s why a lot of what we do is DIY. That’s why you’ll find that our themed parties don’t cost a fortune, and we don’t have elaborate decorations. We do just enough to create an atmosphere and a theme.

So while some might not consider our DIY monster party decorations to be Pinterest or Instagram-worthy, I like to share them because they are simple, affordable solutions for fellow moms to do as we do, without breaking the bank.

To make a trio of monster rosettes, I got these pre-made tissue paper pom poms.

I opened them to form a half-sphere that sits against the wall, instead of opening them fully. 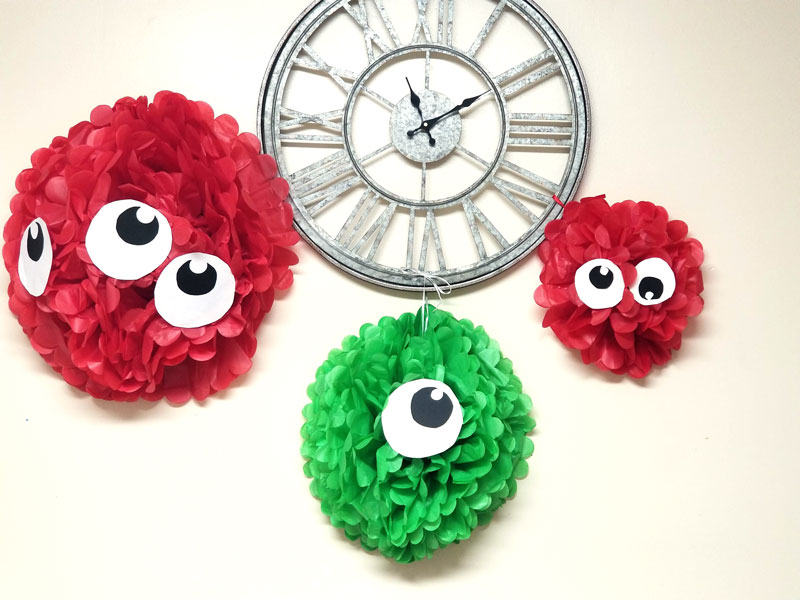 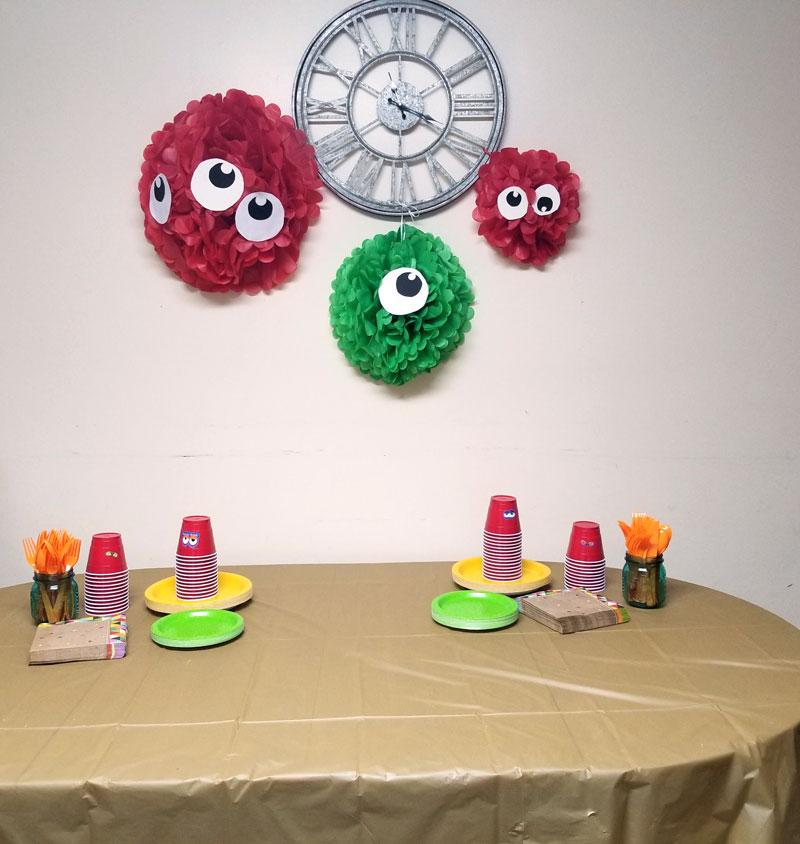 I cut big eyes out of white and black cardstock and attached them using glue dots. I then hung them from the clock on my wall. They can also be attached directly to the wall with painter’s tape.

I confess, I had high hopes for this and it wasn’t spectacular, but they made fun DIY monster party decorations to scatter on the table. I also didn’t plan it in advance and did it spontaneously. These would make a fantastic monster birthday party garland, had I had enough! But I didn’t, so they remained a just-okay table accessory. 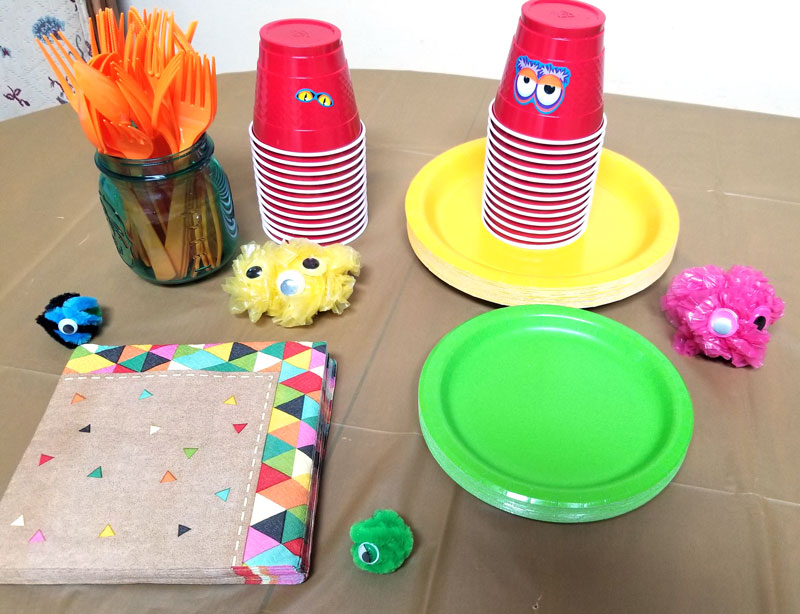 For the DIY monster party decorations made from leis: I took plastic leis from the dollar store (a seasonal item – get them here if they’re not in-season) and knotted them in the center. I then wrapped one half around the center, and followed suit with the other half, to form a ball. I glued on large googly eyes using tacky glue. 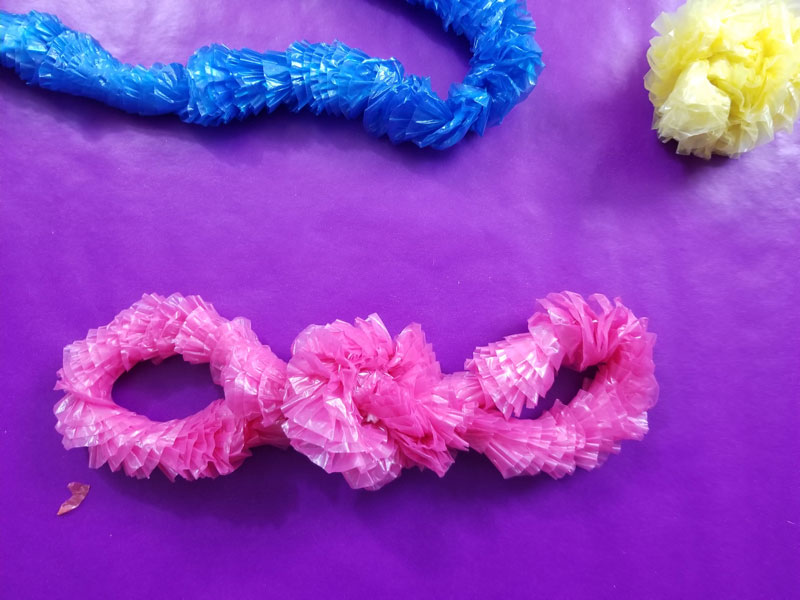 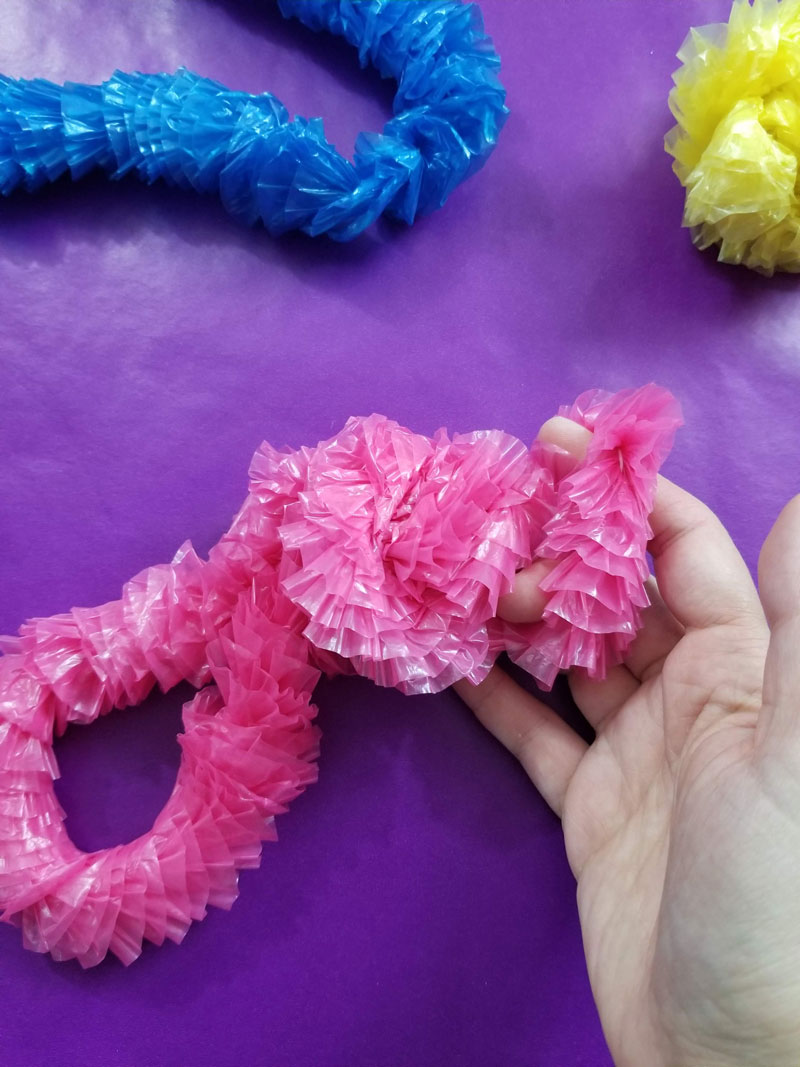 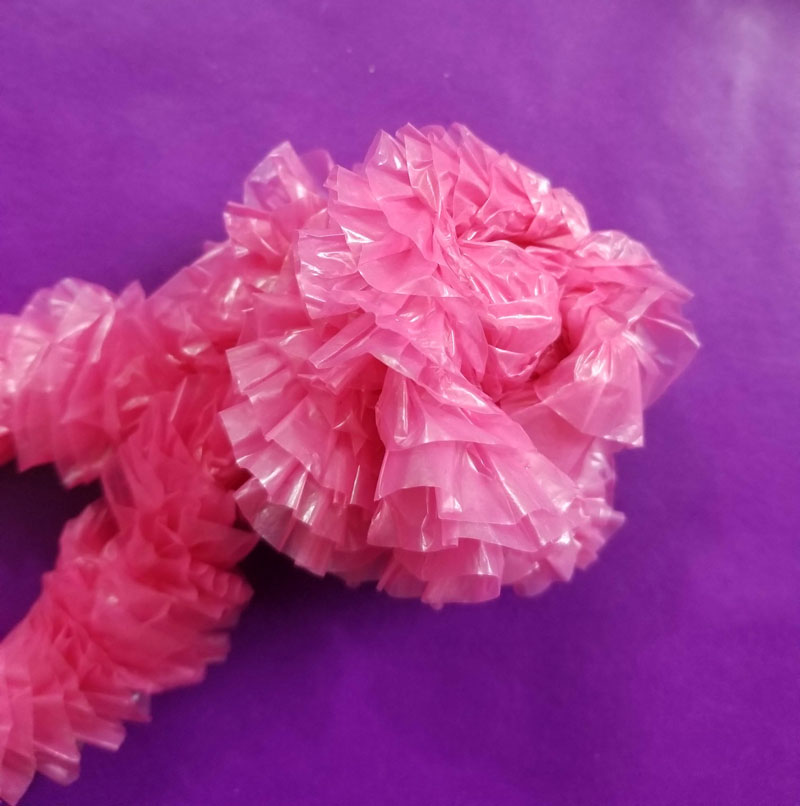 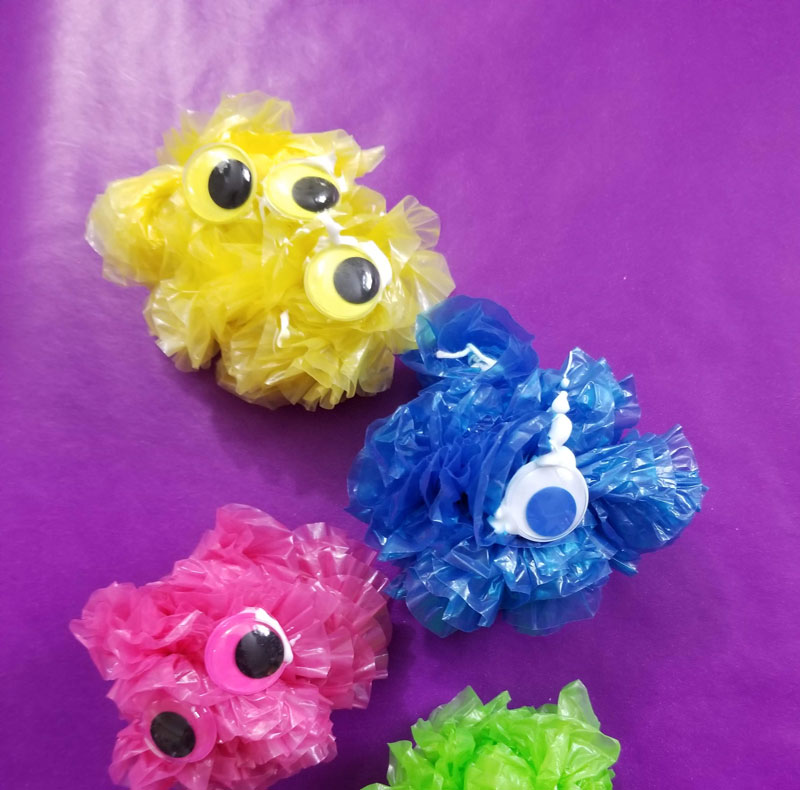 For the DIY monster party decorations made from chenille stems: I took jumbo sized pipe cleaners and folded the end. I then wrapped it around itself to form a furry ball. I then glued on a googly eye or three. The kids had fun helping with this! 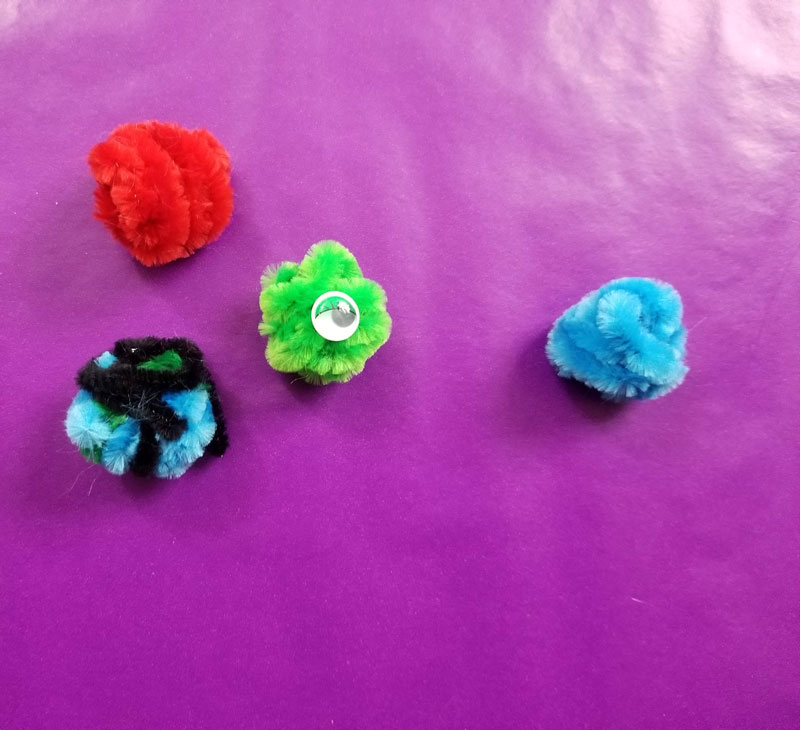 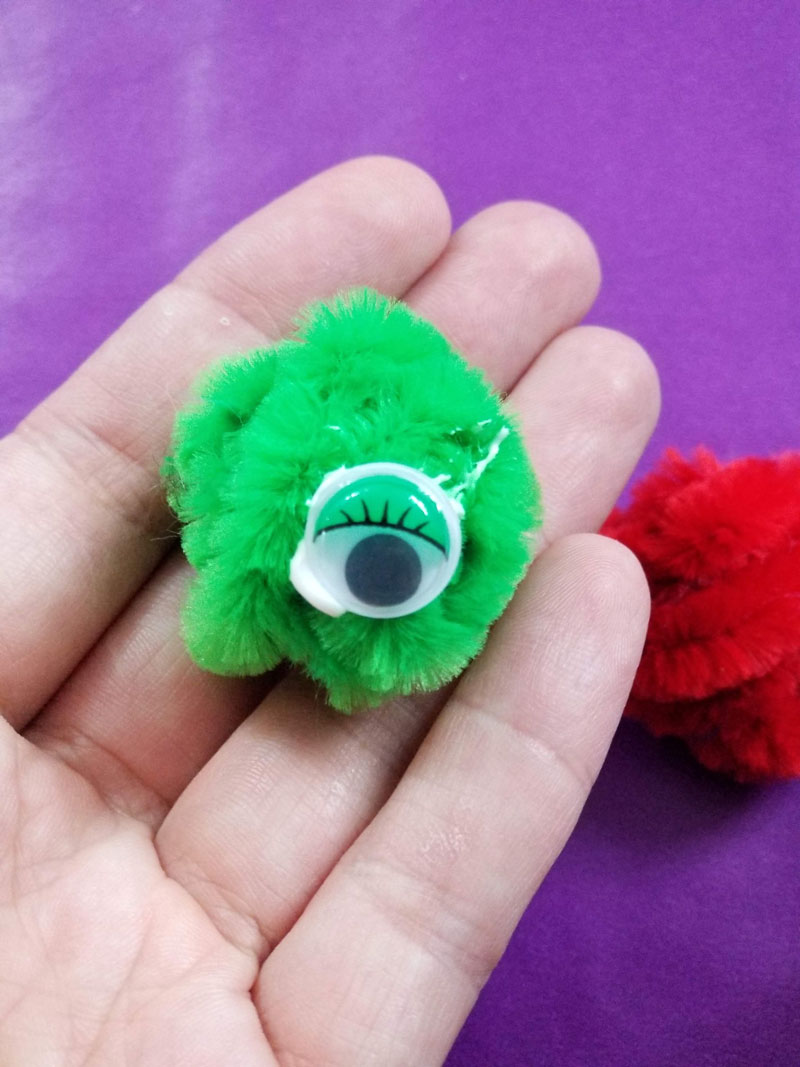 While normally I do get themed paper goods for birthday parties, for this one I didn’t. Usually, I get some paper goods themed and coordinating solids to balance it out, as you can see I did by our LEGO themed fifth birthday party for M.

For this one, I not only had some paper goods from a different event that I wanted to use, but I also was specifically aiming for a hairy monster theme, since Y was getting his traditional first haircut, and that was the whole inspiration behind the party theme. I wanted the most prominent monsters to be hairy.

And finally, because it was more of a mature reasoning behind the celebration with the family, celebrating Y reaching the age of “teachability” and understanding, I didn’t want it to be SO cartoon-y. 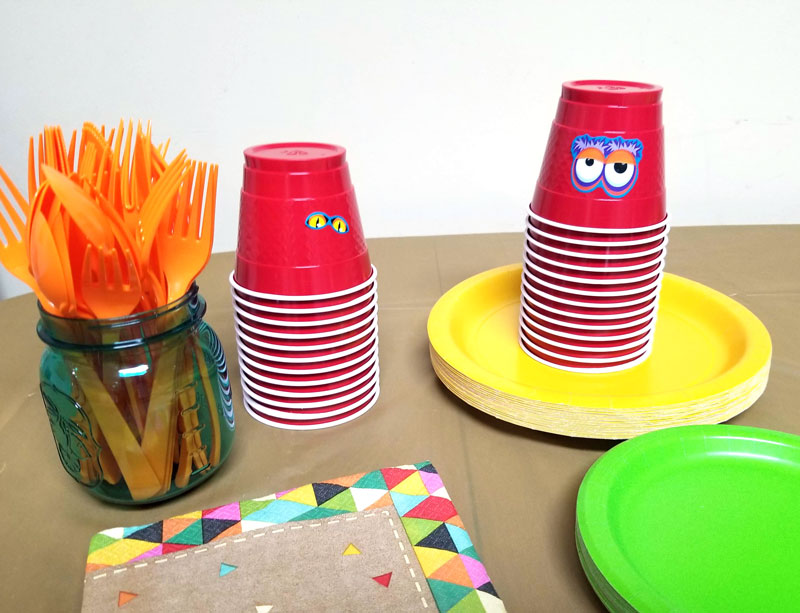 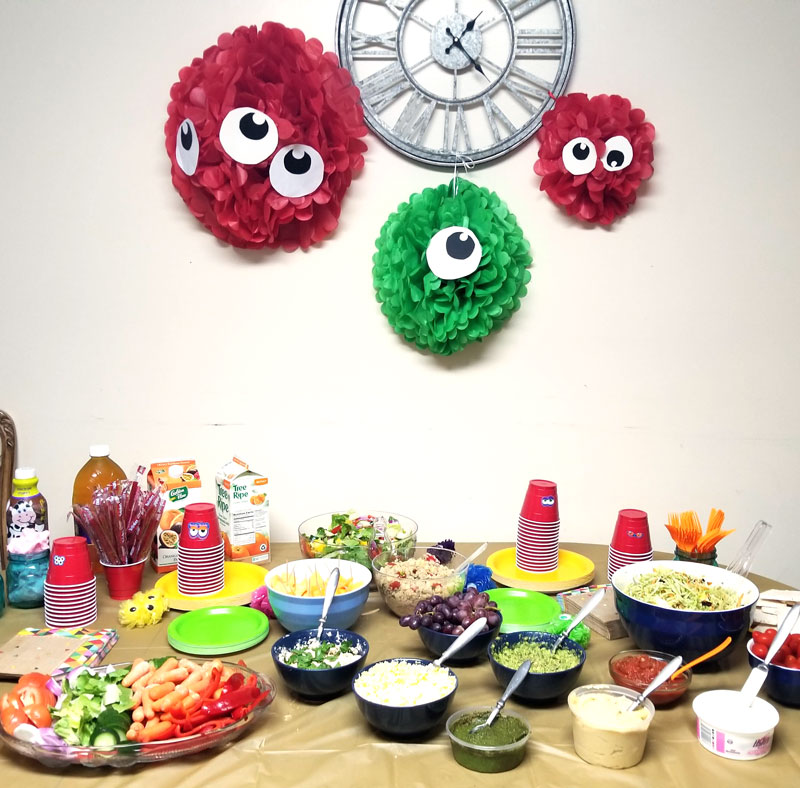 While you can pick up monster paper goods at an affordable price, you can also work with solids like we did, and rely solely on your DIY monster party decorations (as well as favors, food, and activities) to bring in the theme.

I also wanted to involve the boys as much as possible.

One night, I sat them down with the pile of red party cups we bought and a pack of weird eye stickers (the ones we got aren’t available –these are similar but any will do) and invited them to have fun! 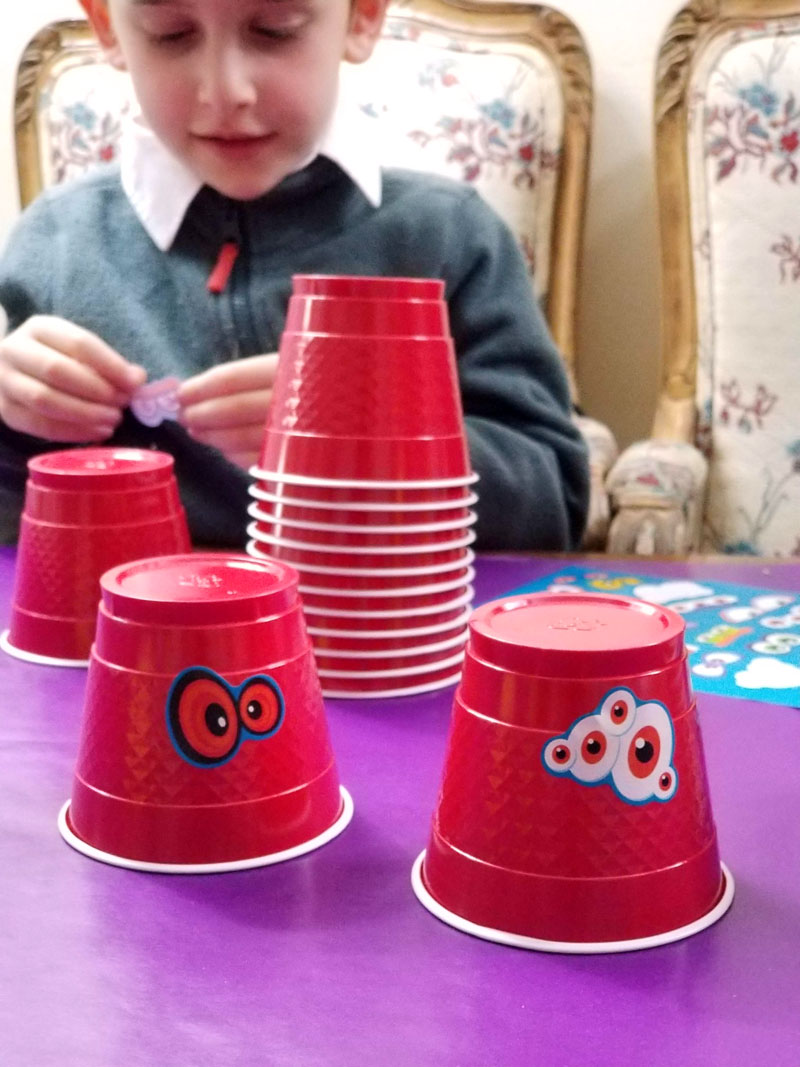 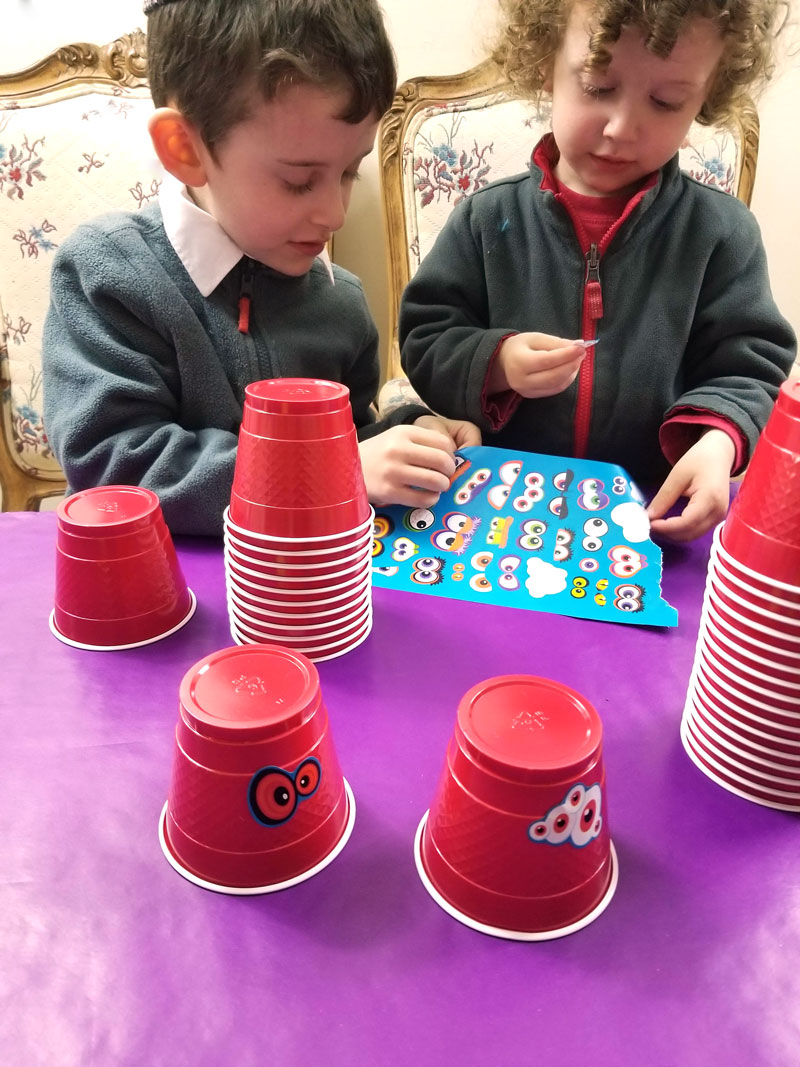 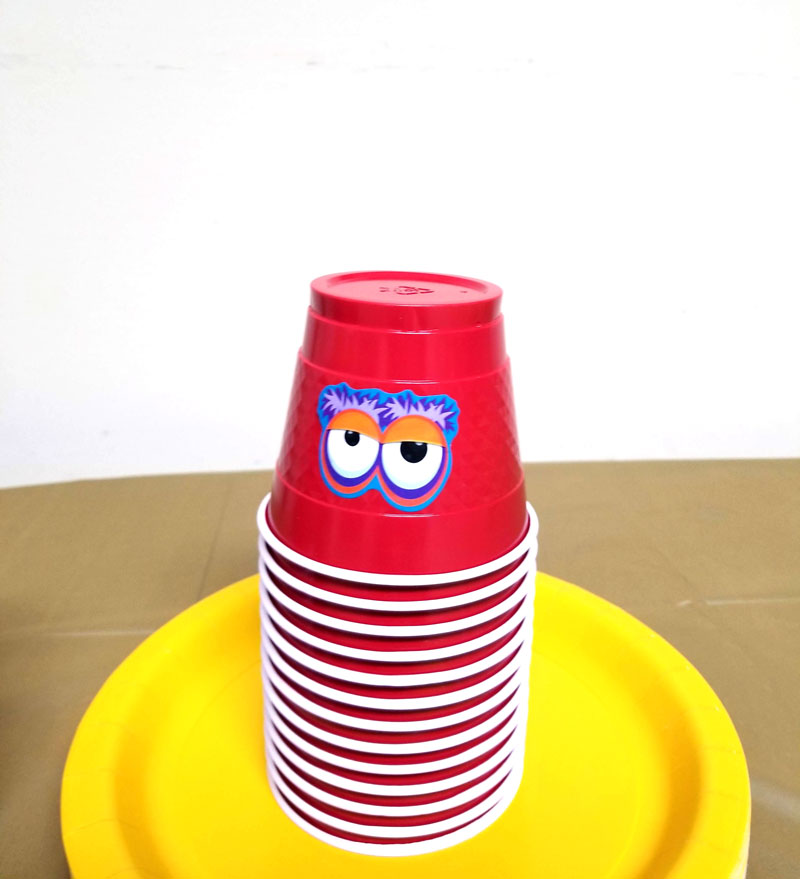 So we had fun creepy-eye cups at the party as well.

No, it was not an in-your-face monster theme, fully decked out and decorated. But it was a pleasant party prep, and it was a fun, colorful atmosphere.

I’m going to share with you some of the fun food crafts prepared for the party in a future post and I’m going to create a post outlining the whole monster party for you. I hope our DIY monster party decorations helped you plan your own!

Have you ever thrown a monster party? How did you decorate? Comment below!